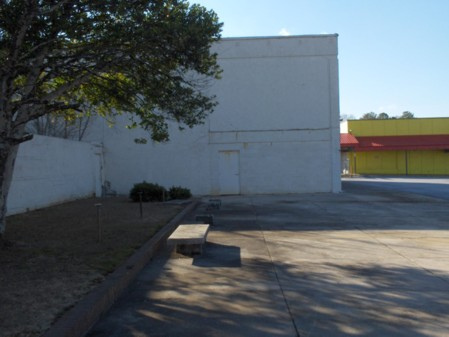 The Storey circuit’s Lakewood Theatre was the last single screen theatre to be erected in southeast Atlanta. It opened on October 12, 1966 with Stephen Boyd in “Fantastic Voyage”. It was initially equipped with a spectacular wide screen and state of the art sound system. These features were lost when the theatre was split in half and converted into a twin cinema which opened August 16, 1974. As business dropped around the adjoining outside mall, so went the traffic at the Lakewood Theatre. The theatre was shuttered in 1987 and was still standing vacant at the turn of the century.

Thanks Mike,In the Fall we could always count on “the Sound Of Music” being booked in the early to mid 70’s. At National Hills in Augusta,The old ladies drove this 17 year old doorman crazy.

Thanks for the list Michael. I am pleased to see that you got your Birmingham and Atlanta information for your Sound of Music article before you decided to restrict it to reserved seat engagements. Three things about that list stand out for me.

First, I see that the engagements at Lakewood and North DeKalb started the same day as the one I described attending at the Ritz Theatre in Birmingham on its page. I wonder if this was some type of regional or nationwide Christmas (unofficial) reissue to take advantage of the holiday business. It might have been what amounted to a moveover in Atlanta, but in Birmingham it had been over a year since the end of the roadshow engagement.

Second, I attended the June 1968 engagement at the North 85 Drive In. I recall the field being crowded and it must have done well to stay for two weeks, a very rare event at a drive in.

Third, I recall the ad in the Storey ladder for the August 1969 Emory engagement. They had block lettering over the title reading “Going Out of Release Until 1973.” I thought that was just some angle to try to get people to attend, but turns out it was true.

I guess that about wraps the SOM discussion here, but there was one other thing I thought of while looking at the microfilm the other day. In those days when newspaper movie ads had some character instead of looking like the phone book, it was the norm to see the artwork in the ads updated with new scenes and a fresh look as the run lengthened. In all of the SOM ads then and later I do not recall anything other than the classic Julie Andrews “dancing” pose. Just like with the Scarlett and Rhett picture on the GWTW ads, it was all you needed to see to know what was playing.

During the 1960s, Lakewood, Greenbriar, Westgate and the Eastpoint were the only places in this area to see a movie. Unfortunately, they would probably be playing the same thing. Many times, the Eastpoint and Greenbriar would play the same thing even though they were owned by the Georgia Theater Company.

Thanks Dennis for your comments on The Sound of Music. I was only about 9 or 10 when it played at Lakewood so my memory is not as developed as it would have been if I were older at the time.

Another memory of Lakewood is going with a friend when in the fifth grade to see The Night They Raided Minskeys. Would you let a 10 year kid go unsupervised to see that. Those were the days.

Looking at the Lakewood building today, and the surrounding shopping center, no one would believe that that whole area was a thriving shopping center in the 1960s and early 1970s. 72 Lanes as well as the Funtown amusement complex was right down the street.

How things have changed.

thanks Stan and Jb,“MINSKEYS” was rated M,bet you guys thought you were going to see something!LOL.

I grew up in the Lakewood Area. I remember my parents taking me to the Lakewood Theatre to see The Beatles Yellow Submarine and Dr. Zhivago. I believe i saw 2001 – A Space Odyssey as well. I remember getting the Marathon Candy Bar and the Chunky Candy Bar. There was also a small drive in theatre across the street from the Lakewood Shopping Center & Zayre’s on Stewart Ave (where a car wash sits now). The stores I remember visiting were Woolworth’s, Woolco, Otasco and the Dipper Dan. I believe the grocery store in the shopping center was a Colonial Store. Back then the stores has huge glass windows. We often went to the 72 Lanes Bowling Alley anadjoinngs

Isn’t this 1723 address the old Lakewood neighborhood theatre in Lakewood Heights…not the theatre at the Stewart Lakewood Shopping Center, which is being remembered in these comments?

I WORKED AT THE LAKEWOOD TWIN THEATRE IT WAS LOCATED AT 2027 STEWART AVE..S W ATLANTA GA 30315 AT THE OLD LAKEWOOD SHOPPING CENTER.CLIFFORD CASE AND PEARL BROOKS WERE THE MANAGERS THERE..STORY’S SOLD THE LEASE TO A ONE OWNER OPPERATION.AROUND 1987.THEY CLOSED ABOUT A YEAR WHEN STORY'GAVE IT UP.I WAS VERY YOUNG AT THE TIME.CLIFF WOULD PAY ME TO POP POPCORN BECAUSE I WAS TO YOUNG FOR PAYROL.ROY AND HIS BROTHER JOE WORKED WITH ME THERE ALSO SAMMY BROOKS PEARL BROOKS SON..I WORKED THERE FROM 1979 UNTIL 1987.I LOVED WORKING THERE IT WAS ALOT OF FUN.I CAN REMEMBER MIKE WILSON WOULD NEED EXTRA HELP AT OLD NATIONAL.SO I WOULD GO THERE TO HELP HIM..ALSO JIM HARVEY AT NORTH 85 DRIVE INN.I WOULD WORK THERE FOR MORE HOURS.I COULD WRITE A BOOK ABOUT MY TEEN YEARS AT THESE THEATRES.GOD BLESS PEARL BROOKS,SHE WAS A VERY GOOD FRIEND.AND MY THEARE MOTHER.SHE HAS PASSED ON..BUT SHE STILL LIVES IN MY MEMORIES AND HEART..TO ALL THE MY FRIENDS I WORKED WITH THERE I STILL KEEP YOU IN MY HEART AND PRYERS..I WOULD LOVE TH SEEM THEM AGAIN.THE HOOKS…AMMY BROOKS.I DONT KNOW WHAT HAPPEN TO CLIFF.BUT I TALK WITH BOB..OUR TALL SECURITY OFFICER FROM THE SHERRIFFS DEPARTMENT.ANY WAY…HOPE THIS BRINGS GOOD TOUGHTS TO YOU..JAMES BETHUNE 678 906-9598

I hear Ciff Case is still alive in Atl. he owns a few rooming house I’m told – My name is dale cartee and my brother was danny we both worked there for many years i still work there from 1972 – 1980-81 – i’m living in england now my brother is still in Ga. i work at OLD NATIONAL when Ciff went there for a while then back to Lakewood – the good old days…