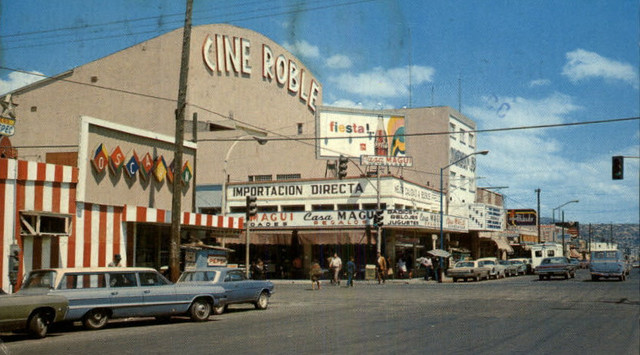 This huge theatre must have been the largest that operated in downtown Tijuana. The main entrance is located along a side street and is quite small compared to the bulk of the auditorium block that towers over neighboring buildings.

In late-2011, work began on a restoration of this cinema.

Ken,
You are absolutely right about the abandonment of the theaters in Tijuana. I will try to find out the seating capacity for Cine Roble.
Thanks for your feedback.
Elizabeth

CINEMA TIJUANA 7O, any pictures from the 70’s, CINE ROBLE I attended to this very sad auction of the theater goods, I guess people whitout vision created this mess. CINE TEATRO on calle 7th, a beautiful arquitectural peace from the 30’s … I heard municipal government branch was trying to take care of it… go figure… CINE ZARAGOZA ..?? CINEMAS GEMELOS .. CINE BUJAZAN .. lets save at list the ticket booth!!! let me know how can I contribute with the pictures for the site….
Mario

Mario(white); here is a link to another cinema website where I have posted some photographs (click on ‘Tour’ against each theatre to see them):
http://www.cinematour.com/theatres/fo/MX/1.html

Hi Ken, thank you so much for the wonderful pictures, indeed a sad situation with this clasic cinemas, specially CINE BUJAZAN, I wonder how far we are from finding the way of making profit on remodeling every possible classic theater in the world.
Somehow re inventing the way people used to show up to the theater, big and spacious, rich in ornamental architecture and old fashion amenities.
I am not against modernism, but if I want to get into a little square cage, full of sofisticated technology and watch digital video quality, well.. plenty of places now days haa..
Anyway lets keep dreaming..

Hola Elizabeth, Mario, Ken and others,

My namer is Hunter and I’ve been working in motion picture production for 26 years, some of it in Mexico. I have always loved the old movie theaters in the US and Mexico. The other day I was in Agua Prieta, Sonora and saw Cine Arie, which has been closed for many years. It’s across from a plaza and I have to wonder how many people really notice it anymore. I’m sure people miss the matinees and memorable evenings spent there.
I may not be able to re-open an old Mexican cinema but I do intend to bring my mobile cinema to many cities in Mexico. I’ll be
screening films from Mexico’s Gran Epoca de Oro(the golden era of
cinema). This includes films by Tin Tan, Cantiflas, Jorge Negrete,
Sara Garcia, Maria Fleix, Pedro Infante, Lola Beltran and others.
I’ll be screening most of the films outdoors, all shows will be
free. Yes, there may be some problems in presenting such screenings.
The films technically belong to studios and distributors, though most of these films have long ago moved from cinemas to the home video market. These classics can be seen on spanish language TV but
they are usually shorter than the original and have lots of
commercials every 15 minutes. Who really owns these movies? The
Mexican people, that’s who. Beyond traditional ownership of movies,
these are national treasures and a very significant part of Mexican
history & heritage.
My traveling cinema is called Highway Cinema. So far, I’ve
presented 650 free screenings. My tours have been in the US, Canada
and on the west coast of Mexico. In Mexico my cinema is called Mi
Cinito(my little cinema). Imagine the delight for a poor Mexican child to tell everyone where he’s going, “A mi cinito!”. However
brief, this child has his own cinema, his own cinema paradiso. It’s
not mine, I’m just the delivery person who turns the projector on…
Though most of my shows were on the beach in small towns in
Mexico, I also showed movies in Mazatlan while I was teaching at the university there(Taller de Cine). One memorable screening there was in the open air lobby of the Angela Peralta Theater, a restored opera house. While living in Guadalajara I showed movies at the Cafe La Opera, at an art gallery and even on a few rooftops.
I’m presently completing my first feature film script, which I'll
be directing, co-producing and co-starring in. It’s a spanish-language comedy about tourists in Mexico…
A note on Mexican cinemas: In Puerto Vallarta there is the Sala Elizabeth Taylor, a cinema that has been there for over 30 years. Though it was an elegant cinema with current feature films in it’s heyday, during the past 15 years it’s been an adult movie theater. How embarrasing for Liz Taylor, si? I’ve heard rumors that they are trying to revive it as a premiere movie house and to even
have La Muestra de Cine come to PV from Mexico City. La Muestra is
the annual international film festival presented by Cineteca
Nacional.
A note on US cinemas: In Douglas, Arizona, work is finally underway to restore the Grand Theater. Architect/builder Bruce Endres is presently restoring the ticket booth, next will be the new roof. The whole project will cost over $7 MIL. It’s a wonderful old movie palace that’s worth seeing when you’re in the Tucson area.
A toast to the old cinemas,
Hunter
I have a small website if anyone wants to see it: www.HighwayCinema.homestead.com

Hunter,
Thank you for sharing your information. I’m so glad that at least someone still cares for these classic theaters and old time movies.
I wish you the best in your old cinema endeavors.
Elizabeth

Ken,Chuck,Elizabeth,Evaldez, everybody, The CINE ROBLE" its being remodeled as we speak…. ( Or tipe) This big boy is undergoing a mayor overhaul from the inside to the outside,including the main facade, front access theatre box the whole nine yards. There is even a YT video (sorry, no link at this time) were it shows the whole remodeling and comments from the architecture firm and contractors. Wooow, who would it thought , they talk about some private deal , making this a wonderful reality… Much more to come, thats for sure….

Hi, My name is Alex and I’m very interested in learning some of the history of Cine Roble. A reporter and I (for a show called La Frontera to air on a local San Diego TV) are doing a story about the remodel of the theater. And, while I’m interested in details of the remodel, I am also very interested in the experience of locals who regularly visited the theater when it was open. I would love to know anything about the theater in its hayday. I would be thrilled to find someone to do an interview with. If we can share this history with our audience, it will make the remodel a far more compelling story. If you know of anyone with old photos or know of someone who might be interested in being interviewed, please get in touch. Our deadline is on Jan. 23nd. Thank you so much.

Almost forgot. I found a couple of links you might enjoy related to the theater.

Before the Cine Roble had been gutted… …we had rescued the Lobby Cards.

It had been the Regional Archive for 20 Theaters: TJ, Rosarito, Ensenada.