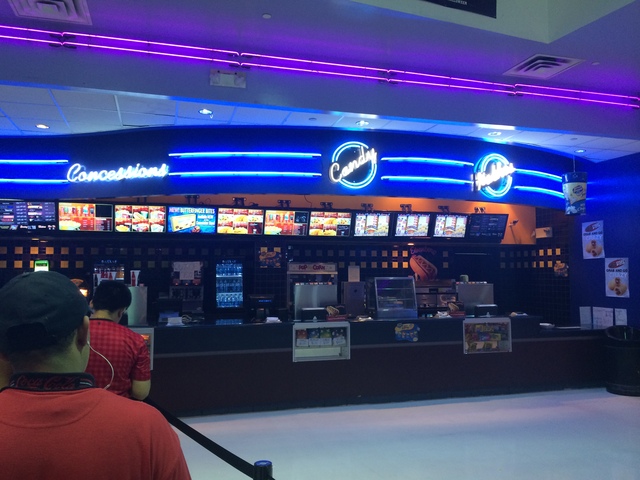 Regal Cinemas Columbia Park opened on June 26, 1998, about a year and a half after their Bergen Plaza 13, putting in to an “urban enterprise zone” 25 screens, assuming the theatre would be as profitable as the Regal Cinemas Hudson Mall, located nearby.

The theatre failed miserably, it was never crowded, even on Saturday nights. The theatre originally played some popular features like “Cast Away” and “The Patriot” on their opening weekend before it became a hold over house for the Loews locations in Seacacus. At one time a film would play at Loews, then at the Columbia Park, then at Cineplaza.

In 2004 it was acquired by Cinemark’s Interstate Theatres brand and operated as a $2.00 a seat house. Now films play at Loews, then Cineplaza, and this location (many features playing there are either unsuccessful in their first run or are almost out on DVD).

The cinema has an identical layout on its two floors: both levels with six stadium seating auditoriums. They are pretty similar in style to the ones at the Regal in Battery Park, as this one opened along with the Battery Park 16, Court Street 12, New Roc City 18, and Kaufman Asteria 14 as part of Regal’s aggressively entry in to the New York market. The above locations soon after became United Artists theatres (I have no idea why, a sign was taken down leaving no marking of what was in the basement of Columbia Park for a few months until the owners reattached the letters CINEMA.

Regal’s move in to this market was ill-fated. This theatre made some of the same mistakes of the Bergen Plaza (now Cineplaza) – both were in the basement of shopping centers, parking was done in a dearly lit enclosed lot. Meanwhile this one should have fared well- the hoping center Columbia Park is a hit with 3 % sales tax.

Now the theatre is substantially more crowded, even on weekday nights with $2.00 a seat price policy, a bargain in the Northern NJ/Manhattan area where ticket prices can range from 9.50-10.75.

Taken over by Phoenix Big Cinemas by 2010, it was taken over by Empire Cineplex Cinemas in 2013. It was closed in September 2019.

This is terrible news. It’s a real blow to variety in the multiplexes in the area. This place was the only place dedicated to Bollywood films and it’s a real shame that that was stopped. Bwood films are a ton of fun and worth the trek to see them.

I agree with you…the closest theater near where I live right now is the Clearview in Parsippany, where they might show a Bollywood film or two once in a while amongst a wave of blockbusters and indies. Other than that, I’m sad for those Bollywood fans missing on their favorite film on a big screen with surround sound and stadium seating, hopefully the new Xanadu might play some films of that type.

now owned by big cinemas, an indian theater company. digital 3d is now at this theater.

This theatre has returned to playing first run, with a mix of mainstream and Indian fare.

Still one the strangest theaters I’ve ever been to – went yesterday to see a film, as is the policy of Empire Cinemas they leave their theaters pitch black (I suppose they’re too cheap to install automatic lighting cues). The hallways are getting painted white and yellow. The seating is now a mix of second-hand seats from Kerasotes down the street (which recently installed luxury recliners) and rocker seating from somewhere else. The theater I was in had the later installed and they were quite comfortable. It appears despite the promise of luxury recliners that Empire Cinemas has abandoned the plan, Allwood has them in certain auditoriums (others I think got the second hand Regal seats from this theatre). Very odd operation these folks run.

some of the seats from this theater were transferred over to the allwood sixplex.

This opened on June 26th, 1998 by Regal Cinemas and on December 18th, 1998 it switched over to Spanish-language movies with lower admission prices. Two ads posted in the photo section.

it did live a long life for 21 years.

This theatre as well as the 13 in North Bergen were dogs since the day they were built.