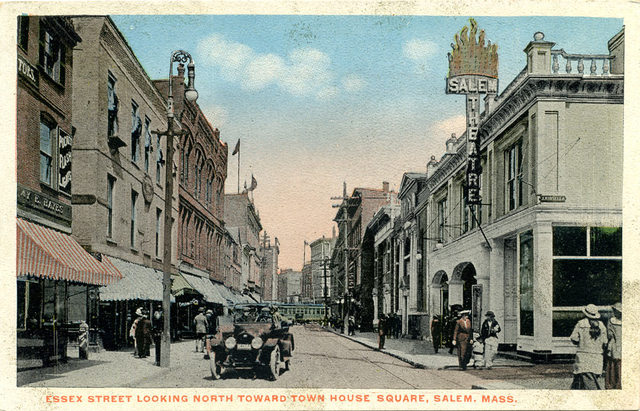 The Salem Theatre was opened prior to 1914 and was operated by the Koen Brothers. It was closed around 1930.

I can’t answer your exact question. But during the silent picture era, I know from my parents that there were The Comique, Nickelodian, and Federal Theaters downtown. The first two were quite small and disappeared a very long time ago. The Federal was still standing for years, but the theater itself was closed. I believe the first floor was then occupied by a First National grocery store with a candlepin bowling alley on the lower level. When you viewed the Federal’s exterior, it was unmistakenly a theater, with the high stage structure for “flying” screens, curtains and scenery for plays and vaudville shows. During Salem’s urban renewal frenzy in the 1960s, they put the wrecking ball to the Federal shortly before the Paramount was leveled. I am quite sure that where the Plaza Theater (an E. M. Loew theater) stood, there was an earlier Plaza Theater there destroyed by fire. So the one that most of us remember was actually the “New Plaza”. I believe the word “New” actually appeared in small stylized letters before the name on the marquee. I can tell you for sure that E. M. Loew’s Salem was not sited where the Empire Theatre had stood, as I clearly recall the Paramount, Plaza, E.M. Loew’s Salem and the closed Empire all coexisting during the 1950s.

Dave, the biography of the Koen brothers I linked to in my previous comment mentions the Comique and the Federal, and even gives the Federal’s opening date, March 23, 1913. John Koen’s first theater was a 144-seat storefront operation called the Cozy.

There’s a picture of the old Salem Theatre in this book, and the caption says the view is along Essex Street from Barton Square toward Washington Street. The Salem Theatre was on the right corner in the foreground, so it was about a block and a half east of the site of E.M. Loew’s later Salem. It opened in 1901, as one of Julius Cahn’s operations, and closed in the 1930s.

That’s great information. The Federal Theater was always a mystery to my generation—it was there but yet it was not. I imagine that the businesses occupying space there were likely tenants who would not have had access to the theater. It would be great to know what the interior looked like. Being closed for so long though, if there were roof leaks, it was probably quite deteriorated by then.

I checked out the picture of the older Salem Theatre. Interesting! All those pictures were fun to look at. On page 34
there’s a picture of the YMCA. The rooftop loggia they mention we called “The Colleseum”. Years later it was removed. On the second floor of that building is Ames Memorial Hall which is being fully restored to its earlier splendor. They’ve done something right!