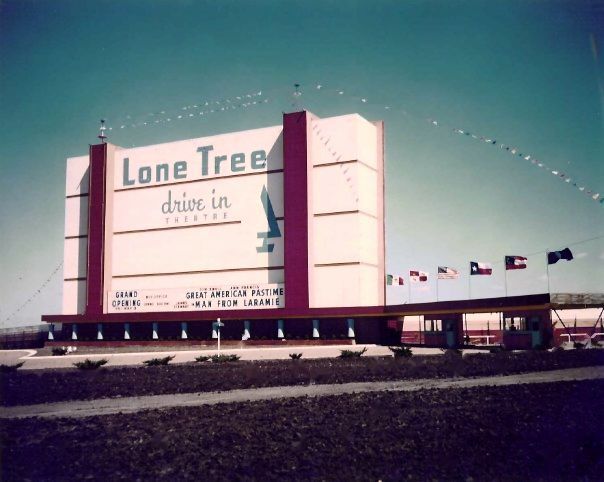 In the 1950’s Rubin S. Frels flew around Victoria, Texas in his small airplane and spotted 79 acres of property that was owned by the Tomforde family. It was located on Lone Tree Road east of the town. He bought the property and built the Lone Tree Drive-In theatre. The Lone Tree Drive-In was built by Frels Theatres Inc. The theatre was headed by Marjorie S. Frels, President, along with her children Rubin S. Frels, vice-president, and Marjorie Frels, secretary-treasurer. Mrs Frels husband Rubin Frels is deceased. The Lone Tree Drive-In opened on March 8, 1957, featuring the 1956 comedy first-run of “The Great American Pastime” with Tom Ewell, Anne Francis, Ann Miller and Dean Jones. The second feature was the 1955 western “The Man From Laramie” with James Stewart, Arthur Kennedy and Donald Crisp.

The Lone Tree Drive-In would revert to playing second-run movies that played in the Uptown Theatre and Venus Theatre, Victoria first. Occasionally Frel’s would screen a first run movie at the Lone Tree Drive-In and they also showed Spanish movies. At that time he was also operating the Tejas-Aztec Drive-In, Bay City Drive-In, Bay City, TX and the Rice Drive-In in El Campo, TX. Rubin S. Frels and Doyle Oliver, general manager, spent two years planning the drive-in theatre. It was planned as a twin screen but the drive-in business in the area slowed down. It was decided to build it as a single screen theatre instead. Harvey Jordon was the architect and contractor for construction of the drive-in. Jordan specializes in constructing outdoor airers.

It had a parking ramp that could hold 900 cars with two ticket booths for speeding up the process for entering the theatre. It also had room for parking an additional 900 cars if a second screen were to be added to the drive-in. It was the largest drive-in theatre at that time in Victoria, TX. The Lone Tree Drive-In featured a ‘Manco-Vision’ screen that measures 129 feet wide by 50 feet, with the tower being 72 feet tall. It was a new type of screen of aluminium material designed to give maximum visibility without any distortion. Frels used this type of screen at the Rice Drive-In and El Campo drive in’s with good results.

The drive-in’s projection equipment was furnished by RCA along with wide arc lamp houses, speakers and sound equipment. The projector lamps were Ashcroft Super Cinex putting out 140 and 165 amps. A reverse, anamorphic lens especially ground by Bausch & Lomb was purchased because of the long throw distance to the screen. The generator room was located off by itself so the noise would not be annoying to anybody. The projection booth itself was designed large enough to house two more sets of projectors and was wired for serving a second screen. The Lone Tree Drive-In featured a ‘Kiddieland’ playground, with an attendant who supervised at all times. It had the usual playground equipment, but also featured a ferris wheel and merry-go-round, both of which were motor operated.

The concession stand served anything from a bag of popcorn to a complete dinner, and service is cafeteria style, with two lines of cashiers. One of the best selling items was the Frelsburger. In addition to the regular concession stand, it featured a grocery store at one end with more the 200 sundry and grocery items. This was a special feature for patrons and provided an additional convenience for them. There was space and seating facilities for about 200 persons outside of the concession building so they can eat and watch the movie at the same time. An added touch was a lighted walkway through the center of the ramp area with lighted number signs on each ramp to help you find your way back to your car. This layout was designed to encourage patronage to the concession stand. In 1961 hurricane Carla came through and damaged the screen tower.

They would also feature stage shows before the movies would start. Beginning in the 1970’s they started to show R and X rated movies until they closed in June of 1985. In July of 1989 Rubin Frels sold his theatre chain to Cinemark USA Inc. He retained the Lone Tree Drive-In theatre property. The screen tower was demolished on December 18, 1992. Rubin S. Frels commented that it was an eye sore, did not serve any purpose and also for safety reasons. The concession stand remains but is in bad condition. Rubin Frels and Brad Richards would continue to own and operate Frels Pipe Organs, a business dedicated to the restoration of pipe organs and equipment.

My name is Gordon and I worked at Lone Tree back in High School. I sure enjoyed the Adult entertainment Best popcorn around and the Dutch Boy manager made us all laugh!!

Do you know Brad R. Richards?

Gordontheticket boy, is your nickname Corky by any chance? My Mom was the cook out there and I worked there off and on for many years myself. Deep Throat on a 60 foot screen was a unique experience…And your brother was my great friend. Mike

Sorry for the multi posts my laptop is wonky

Why the name Lone tree? It looks like there more than one tree there? Installed something called Minecast System(whatever that is?) in 1969.

The May 4, 1957 issue of Boxoffice ran a three-page spread, with plenty of photos, about the Lone Tree. “From the extra-wide (120-foot) screen to the enticing kiddyland and the 12-employe concession stand with a grocery story for forgetful shoppers, the new theatre is outstanding not only in Texas, but is among the finest and largest in the nation.” 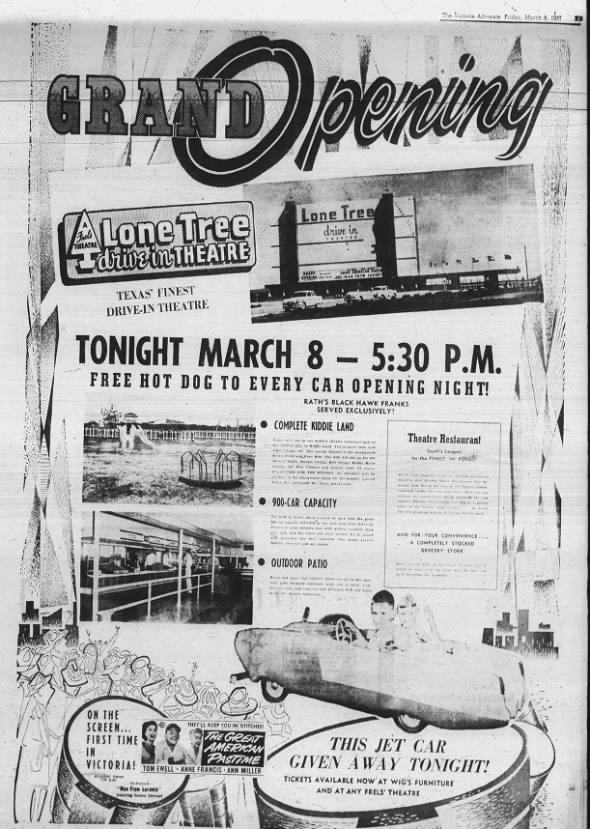 Gordontheticketboy on September 6, 2017 at 11:28 a.m. is an imposter. Comment apparently made as a practical joke by former co-worker. I did work there, but never referred to former boss as Dutch Boy. He had a Dutch Boy haircut. As for “enjoyed the adult entertainment”, not true. We thought it was bizarre.

gleith, is your nickname Corky by any chance? My Mom was the cook out there and I worked there off and on for many years myself. Deep Throat on a 60 foot screen was a bizarre experience…And your brother was my great friend. Mike,

Hi, Mike. Yes. Corky is my nickname. Good to hear from you.

Hi, Mike. Yes. Corky is my nickname. Good to hear from you.