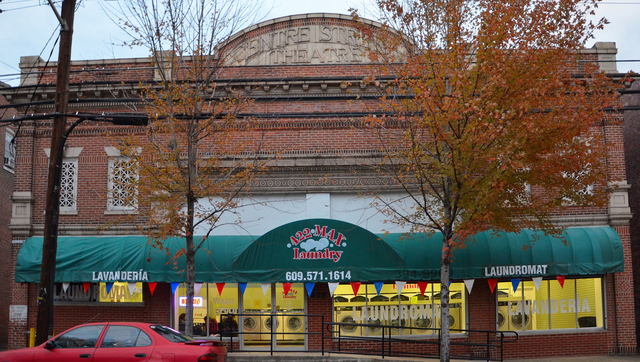 The Centre Street Theatre was opened prior to 1917. A neighborhood house that was operated by a local chain called Associated Theaters of Trenton. Until about 2000 the building was occupied by a party-supply rental firm; later it became a pharmacy and is currently a laundromat. The name of the theatre can still be clearly seen in a stone panel at the top of the building’s red brick facade.

Okay Trentonians, the CYO occupies a building which was obviously a theater at some time in the past. Little has been done to hide that fact. A marquee still exists (although it now says CYO on top), even the parking lot is still intact. The address is 920 S. Broad Street. There was a long forgotten Bijou theater on South Broad, but nobody’s come forward with any information about it, and the address is not the same. If you know anything, I’d be curious to know.

The theater you are referring to is the Victory Theater. In fact, there is a Victory Florist across the street or around the corner. It is located on the same side of the street as the RKO BROAD but a half-a-block closer toward downtown. It was another small neighborhood theater that has been a Salvation Army thrift shop ever since I remember it.

Listed on page 126 of the 1917 Trenton City Directory under “Moving Pictures”. Address is given as 422 Centre Street.

According to The Times of Trenton article “Trenton’s Bijou days are bygone” 5/24/1993, the Centre was at 422 Centre Street and it is now Adams Rental. A web search finds http://www.adamsrental.com/ still an active business.

Nicholas Capone and Michael Fonde are now operating the Center in Trenton.

See “Photos” for the October, 2011 photo that I just posted. This building currently houses a laundromat.

the bijou is now a church & has been for several years——there is also a church on broad st in hamilton across from mcdonalds that used to be a theater to—does anybody know the name?

RKO Hamilton at S. Broad and Maddock. Sister to RKO Brunswick on Brunswick Ave near Circle, both built late 40s.

Adams Party Rental occupied the Centre Street Theater at 422 Center Street from approximately 1962 to 1999. Frank and John Adamczyk (Adams) replaced the original elevated wood floor with a flat concrete slab but made very few additional changes. The second floor had a large doorway through which flame-driven projectors were lowered to be sent to a school in Poland. Frank died in 1978. John sold the business to David VanDenburgh in 1988. I’ve looked, but never found any photos from when it was a theater.
John told a story about his father moving the family from Cleveland to Trenton during the depression, in search of jobs. John was five years old when his father took him to the Centre Street Theater as a reward because of John’s good behavior on the trip from Cleveland. When the bad guys started shooting at the good guys in the Western, John’s dad took him out to the street because John was so afraid. As a 75-year-old man, with tears in his eyes, John would say, “And I never dreamed I would one day own the building.” Many customers used to stop in just to reminisce about watching movies at the Centre Street Theater at the cost of a nickel.