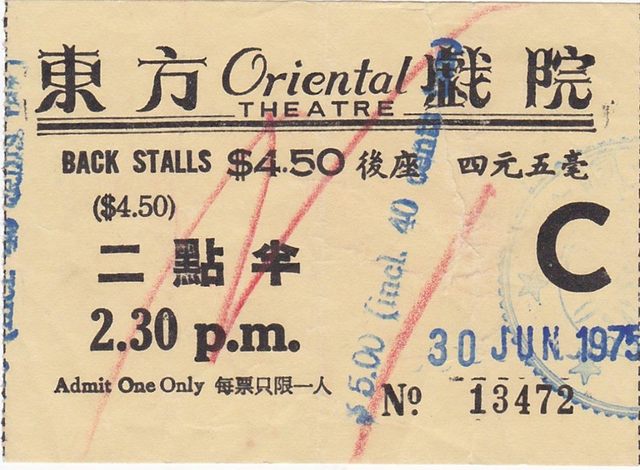 A news article published by the evening newspaper on 1st August,1932 reported that:

“Capacity houses attended the opening of the new Oriental Theatre, Fleming Road, Wanchai yesterday. An excellent programme was provided, the feature being Paramount’s great success "One Hour With You” starring Maurice Chevalier and Jeanette MacDonald. Sound reproduction by the Western Electric Equipment was fautless. Many fans have been installed, and together with the system of ventilitation, keep the cinema remarkably cool".

Before the outbreak of World War II, the Oriental Theatre was a second-run theatre showing Western movies. In 1935, variety shows were added to the programme. During the war, due to the lack of proper movies, Cantonese operas were performed in the theatre as well as movies censored by the Japanese Army.

After the war, the theatre was re-opened on 10th October 1945. An advertisement published by the China Mail is as follows:

“Our Building, equipment and service just the same as before! Nothing Changed–Three Shows Daily–2.30, 5.30 & 7.30–For today and tomorrow, an MGM million dollar production!–It’s an all star…musical–Gay shows of laughter–Song and Riotous Romance–Eleanor Powell in "Born to Dance” with James Stewart and Virginia Bruce–Western Electric Sound Equipment–Admission: 30 cents, 50 cents and 1.00"

After the introduction of Cinemascope in 1953, the theatre installed the highest standard of the system of Cinemascope on 18th February 1954 and “The Robe” was shown to full houses for several days. As the proscenium arch of the theatre was roughly square-shaped, the masking of the screen had to be adjusted horizontally to meet the aspect ratio of 2.35:1 of Cinemascope.

The theatre was upgraded to be a first-run cinema on 21st December 1967.

On 1st April 1981 it closed its doors forever, and the Wanchai District lost its famous landmark. Unfortunately, the last film to be shown was a soft-core pornographic film.

The Oriental Theatre was my favourite cinema, since I lived in the Wanchai District during my childhood. Among the famous films I saw in this theatre included: “Patton”, “Hello Dolly”, “Tora! Tora! Tora!”, “Lawrence of Arabia”, “The Longest Day”, “The Song of Norway”, “Three Coins in the Fountain”.

The theatre was an elegant and well decorated cinema and the sightline was perfect. The service was of the highest standard.

The last film to be shown before the outbreak of the war on 8th December,1941 was “ç´è²å¼•é³³”.[i can’t find the original English name of this film.]

Before it closed its door forever on 1st April,1981,the theatre detoriated rapidly and no longer was the elegant old lady as it was in the 1960s. Either the sound system or the screen was not of the highest standard of the 1980s since the management of the theatre would not upgrade its apparatus since the theatre was pending demolition in late 1970s.Although 1 was clientele of this theatre in the 1960s and early 1970s,I had to say good-bye to the theatre after a rat was seen running under my seat when I was watching a c-grade Japanese language film.

a black and with picture of Oriental:
View link

and a better one:
View link

Oriental was paired up with Empress in 1970 when Empress was newly opened. it was then switched to Victoria in Mong Kok before paired up with Sands and Gala, Mong Kok.

Besides English language films, Japanese,Mandarin and Cantonese films had also be shown at the theatre.