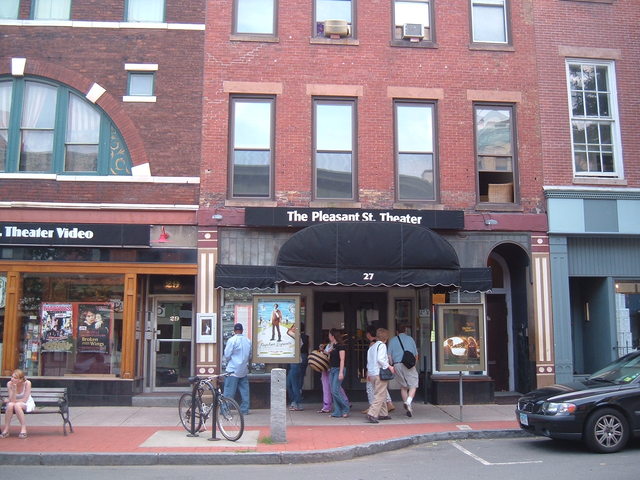 Opened in 1976, the Pleasant Street Theatre is located in the center of Northampton. Operating for over 30 years, this theatre ran foreign and independent films in this college town.

The Pleasant Street Theatre was closed on June 8, 2012.

It’s definitely a neighborhood theater. When you walk in, on the right is the box office and concessions. It’s quite cramped, being maybe 12-15 feet at its widest. The main theater holds 120 seats and I can’t imagine it being too wide, so only long. I forgot the name of this theater (as they are separately named).

Downstairs (down a few, a platform and a few more the other way) is the Little Theater (in a neon sign above). It holds 41 seats. To the right of it is 2 bathrooms. The theater is definitely a long, sloping rectangle with bricks on both sides. At the end is the screen, on top of a carpeted riser with speakers freestanding on either end. The room is probably 12 feet long at its widest and about 30 at its longest.

Unfortunately, you could hear the bathroom plumbing from the back. The seats weren’t exactly comfortable. They were, but you couldn’t get comfortable in other positions. All single ones up front to the almost immediate back. Behind that on the left were 2 “loveseat” (bolted in and cushioned) bench/couches, one behind the other. Then one single seat behind that. Directly behind that was the projection booth, at eye level when standing. Bad choice. You stood up and were blinded. And then your head cast a shadow on the screen. The right side had no couches, but rather individual single seats on the right leading to the door.

But somehow, I still enjoyed it. The sound was great. Commercials were very few.

The adornment is cool, with framed posters and cool lighting and decor with a nice paint scheme.

The Pleasant St. Theater opened in 1976 in a former shoe store, and 1 year later reconfigured its layout (originally the screen was next to the front of the building). Bare Brick walls, nice modern lighting, gives a neat ambience for the independent amnd foreign films they show. When i went, there were even some comfortable sofas instead of auditorium seats in the back row.

The 2nd screen was added around 1980 in the basement. Even narrower, and the seats were all director’s chairs. Still a great location to see non-mainstream films

Right. Not a wise choice, since there are like 5 colleges in that area and a few downtown. It’s mostly neighborhood folks, tourists and students.

I’m glad to see it’ll stay open and get a lick of a paintbrush, too, and I’m glad to see community support kept it open. That is a good feeling. Interesting though that the new building owner pretty much had the “If you can’t beat ‘em, join 'em” philosophy when it came to the Amherst Cinema, but the former owner viewed them as too much competition.

My friend told me the whole story. Basically, the former owner closed it down but didn’t want to sell it. The owner of Amherst Cinemas wanted to buy it from him but he didn’t want to sell, but didn’t want to sit on it either. Local citizens raised $50,000 in a few days and over a few weeks upped it to $100k but it wasn’t enough.
Finally, Amherst owner suggested buying it but not to compete, rather show some movies at his place and then showing them at other times in Northampton and different artsy pics too. Pleasant owner liked that and sold everything to them BUT the projection equipment and stalemated. Eventually, he sold everything.

Since it reopened, it looks like they have put in new carpeting and possibly projection equipment (It’s a platter system) The seats are probably ten years old, quite comfortable and iun good shape, and identical in the downstairs theatre (no more directors' chairs!). Hasn’t been repainted, but current paint job is in good shape. Sound and projection are fairly good. Main auditoprium is probably 30 feet wide – 11 seats wide vs. 12 rows. And still a great selection of films not available elsewhere!

The Pleasant Street Theater will close June 8, 2012, according to a press release issued by Amherst Cinema Arts Center:

An article about the closing.

The space is now (2015) a tavern, McLadden’s Irish Publick House.