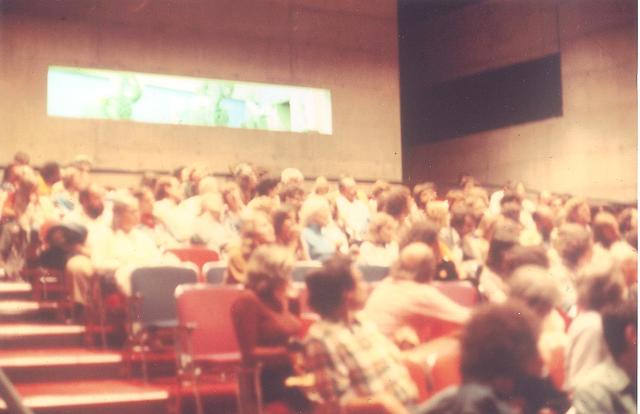 The Pacific Film Archive was originally conceived as an American verson of the Cinematheque Francaise in Paris, committed to exhibiting films and increasing the understanding, appreciation and preservation of cinema.

Once located in the George Gund Theater of the Berkeley Art Museum, it relocated to its own building on the UC Berkeley campus due at least in part to concerns about the museum’s seismic safety.

In addition to showing films, the PFA serves as a premier educational resource for the UC campus and for scholars, teachers, film critics, filmmakers, and film programmers from around the world. It is home to large collections of Japanese flms, Soviet silents, West Coast avant-garde cinema, and many other types of film classics.

Its mission and programming sound similar to the Harvard Film Archive on the opposite coast.

By some strange reason, every time I visited the Pacific Film Archive (I’m from the east coast), they were showing films by Ernst Lubitsch. I saw some rare German silents of his there as well as of original nitrate prints of things like “Trouble in Paradise” and “Heaven Can Wait.” This is one of the few places in the U.S. still able to safely and legally show original nitrate archive prints. They sparkle and glow on the screen as acetate prints never really did. In the days before home video, I once arranged to have private screenings in their study center of 16mm prints of some rarer films by Roberto Rossellini which were in their collection. They were very accomodating. The PFA is a great archive and a superbly programmed showplace.

Ron, I think the Harvard Film Archive is excellent too, inspired perhaps by the work of the PFA which had been going strong for decades before the Harvard one achieved the standard that it has now or owned the state-of-the-art facility that it has now.

Pacific Film Archive’s actual (current) address is 2575 Bancroft Way; the address above is that of the University Art Museum, its former home.

I adore the variety and frequency of programs here, but the industrial/warehouse/shack architecture of the PFA and the buildings around it in the Field Annex puzzle me. It’s like they just threw them up there temporarily, they look like an elementary school complex from the ‘50s. I also wish they had food/drink at the PFA sometimes, especially when you go for 2 showings, it’s a long time to go with no snacks or drinks.