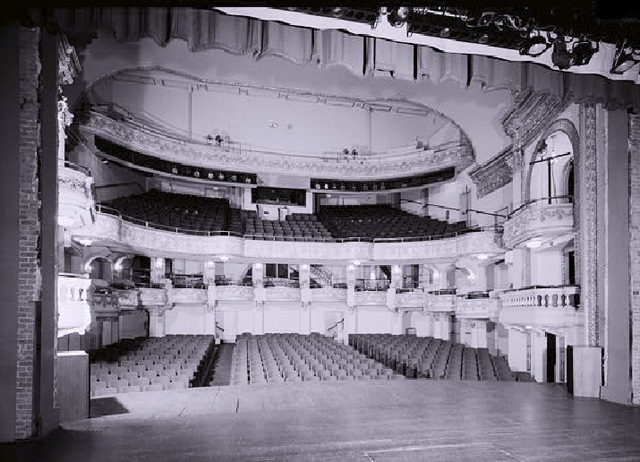 First known as the Majestic Theatre, this theater was modeled after the original Moulin Rouge in Paris. It opened on November 16, 1910 with a seating capacity for 1,400. It was later the Spensley Orpheum Theatre and later RKO Orpheum Theatre when it was a film venue.

Today, it is known as the Five Flags Center and presents several types of entertainment, including nationally-known musicians, professional theater groups, and other live events.

Here is one of the Library of Congress photos from Ed Wilke’s link. There are twelve if you happen across the site:
http://tinyurl.com/34er8t

Here’s another view from a different LOC page:
http://tinyurl.com/2uk89g

Here is another LOC photo, no date given:
http://tinyurl.com/2mrqwe

The first all-talking movie, Lights of New York, began a run at the Majestic Theatre on August 5, 1928.
NEWSPAPER AD

Although the former Majestic Theater is part of the Five Flags Center, the theater itself is billed as the Five Flags Theater (move Street View closer and see the name on the windows.)

Encyclopedia Dubuque has pages for the Majestic Theatre, which features three interior photos, and for the Orpheum Theatre, which has a photo showing the facade.

Side note: before being called the Moulin Rouge it was the Mistinguett Music Hall.

Undated photo as the Majestic added via Robert Ungs.