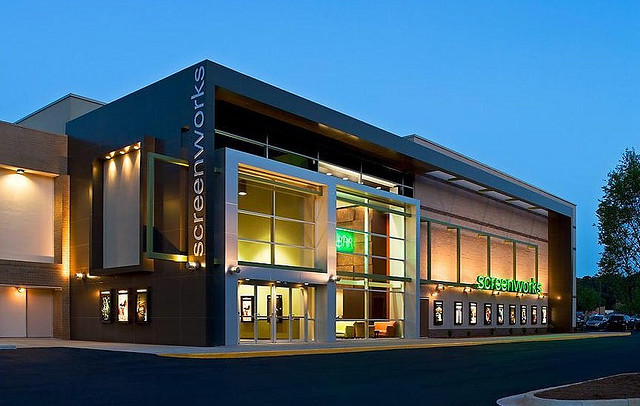 Built as a twin cinema in 1971 by the Georgia Theatre Company, each of the auditoriums were split in the 1970’s to allow for two additional screens which gave a total seating capacity for 1,312. Later operated by United Arts, then Regal Cinemas. The theatre was closed and gutted remaining empty for several years.

Years later, an addition was built on the back-side of the mall, adjacent to the old theatre. The original theatre space then became part of a new cinema complex, known as the De Kekalb Cinemas 12. It was closed in 2015 but was reopened by Satellite Cinemas on April 22, 2016. It was closed in 2017.

The 72,808-square-foot building will house a 12-screen multiplex attached to the mall. It will be triple the size of the mall’s old cinema

The $13 million cinema was made possible when DeKalb County approved a $2.8 million tax package in May 1998 to help seed the project.

South DeKalb Mall has been without a cinema since 1997, when the old cinema was closed. The Theaters will seat 3,600 in stadium-style seats.

Tene Harris, the mall’s general manager, said that work crew had guttied the old cinema which will be replaced with a12-screen theater with stadium seating.

The new complex will also have a jazz bar and a small arcade inside. She said the bar would be only admit patrons who are 21 years and older.

It will be the second Atlanta cinema for American Screen Works, which also operates a cinema at Memorial Drive and South Hairston Road the former general cinema 8.

The 30-plus year-old mall used to have a cinema but it closed in the mid 1990s because of disrepair.

The new complex comes five years after a deal between the mall’s previous owner, O'Leary Partners, and Magic Johnson Theatres to build a 12-screen cinema at the 800,000 square-foot mall fizzled.

The 40,000 square-foot theatre complex , which will include digital sound in all auditoriums, advanced ticket pick-up and an enhanced food and beverage menu, is part of the mall’s redevelopment program

Atlanta-based American Screen Works, whose parent company is the Restaurant Entertainment Group, has been in the movie business since 1979. It operates 32 cinemas in cities like Orlando, Denver, Washington DC, Seattle, Cincinnati and Minneapolis

American Screenworks will be opening its new $10 million cinemas at the Gallery of South DeKalb on April 20, and the Atlanta-based company and mall management are expecting the throngs to come.

Sayed Raza, American Screenwork’s operations manager, said construction crews are working round-the-clock to have the 42,000-square-foot facility at the rear of the mall ready for Opening Night.

“It will be ready,” he said Friday as crews unfurled acres of green, orange and black print carpet and painters added final coats of paint and a slew of women swept and vacuumed construction dust from the cinema’s 12 auditoriums.

The new cinema replaces a smaller old asbestos-laced 24,000-square-foot cinema that closed in the 1990s.

American Screenworks stepped in to build the cinema when a deal with Magic Johnson Cinemas fell through under the mall’s previous owners.

There was “Duffy” involved in some of the various cinema and brewhouses back in the day around Atlanta. He was rumored to be tied up in some sort of monetary games back with the North Springs and a couple of other locations.

RStewart: Thank you for that comment. I looked on the North Springs page that I had commented on years ago and found a link to an article in the Naples Florida paper. It was an investigative report on a Naples Theatre owned by James Duffy and what happened to it. Even if you have no connection to any theater in it the article is well researched and makes for interesting reading. It is not a pretty story. Here is the introduction:

Number of theaters in Florida (most of any state): 17

The link for the entire story is here:

Wow! It is amazing how guys like this can line up financing and con property owners. I had heard that the closed Cineplex 6 screen in Kennesaw that EFW re-opened stayed open after EFW bailed to try to get the employees some money to cover their bounced checks with the landlord’s blessing.

If you Google “James Duffy” you will get page after page of legal documents along with a few more newspaper articles. It looks as if he, at least in more recent years, was in the “getting sued” business rather than the movie business.

Before I started running projection booths I was in the management end although only as a theater manager, never any type of home office work. However, almost everyone in this business in Atlanta had heard of James Duffy. He first came to my attention when he bought up the old Georgia Cinerama, removed the wall and opened it as one of the first drafthouses. I think the actual name was Cinema ‘N Drafthouse. According to one of those leagal documents the McDonalds that now sits in the parking lot there bought the property and moved him out. The building is now a church.

Duffy then moved his operation to the North Springs and stayed there for several years although according to an article in the Knoxville paper, not without problems with the landlord, the IRS, and a whole slew of creditors. For a while he also controlled the old Capri Theater in Buckhead. In the late 90’s GCC, which was on its last legs, had some kind of relationship with Duffy and the DM office at Parkside (where I was working the booth at the time) had the Drafthouse people using some of that office suite.

When GCC shut down, Duffy took over the Hairston 8 and ran it as a dollar house under the EFW banner. The closest I came to working for him was in 2001 when one of the former GCC managers who was now working for Duffy called and asked if I was interested in running the booth at Parkside/Sandy Springs which they had just taken on. Their problem as it was explained to me was that one of their people wanted to show how well he could run the booth. This person went into the Parkside booth which had been closed for over a year and cranked up the sound to the point that several of the drivers were blown. I did not really want to get involved with EFW since I had heard of problems with bouncing paychecks and since this type of problem was really beyond my ability anyway I declined. I guess they finally got someone to get everything running although when I went back into that booth to work for George Lefont I found that they had just robbed the drivers out of some of the existing speakers that were not damaged so that some of the 4 channel houses only had about one and a half channels working.

From the stories in the papers, it seems that Duffy then went into the theatre building business in partnership with local governments, mall and property owners, and investors. Some very nice and impressive theatres were indeed built, but if those stories are true then everyone from the taxpayers to the ticket takers got left holding useless checks, or maybe no check at all when the theatre closed down.

I think that anyone who has been in this business very long has probably heard stories like this especially involving small independent operations, but this case with so many theatres spread over so many states is certainly imressive.

It appears this theatre is open and operated by Satellite Cinemas (www.satellite-cinemas.com)

That is correct. Satellite Cinemas Facebook page indicates that they reopened this theatre April 22 of last year, and as of this current week at least are still open and operating this theatre.

I tried the website to see what was going on at this location and all you get is a blank page. If you click on the tab for all showtimes you get only the two Florida theaters. So, it looks as if this place may be closed yet again. I believe this would make the fifth time which has to be approaching some type of record.

I also looked up some yelp reviews on the mall itself and apparently it has turned into a real dump, and a not very safe one at that. One reviewer said that if it were not for all of the police and private security the place would be half empty. Makes sense since there is a police station in the parking lot next to the theater entrance.