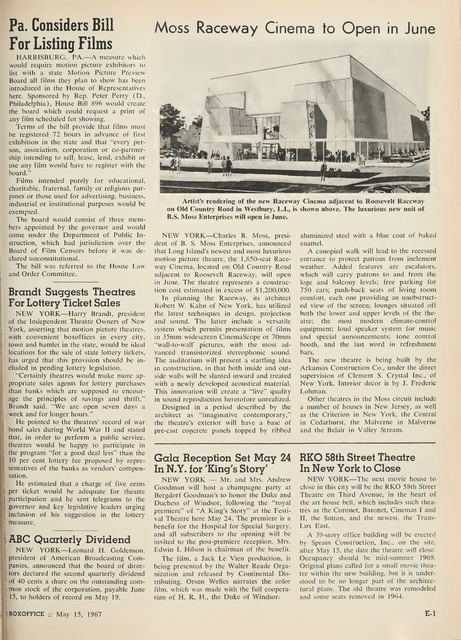 Not to be confused with the present Loews Raceway Cinemas this was a single screen first run B.S. Moss house also in Westbury. The Raceway Cinema was opened on July 12, 1967. It was equipped with 35mm & 70mm projection equipment.

I worked at the Raceway Cinema in summer 1975 during the Disney Film festival. At that point, the building was having structural issues… it’s balcony was unavailable to the public as it no longer could support a full seating up there. It was indeed a Mann theater and their film selections during those years weren’t competitive. It began to have the re-issues of SciFi and oldies as did the now defunct Syosset Theaterâ€¦ thoâ€™ that lasted into the 90â€™s and was THE place on LI to see the original Star Warsâ€™ re-release.
Initially, the movie house was a premier theater with first run, exclusive showings. Tickets had to be purchased in advance and were high priced for the time. It was geared for the Raceway, Island Inn/John Peel Room crowd for a more formal night out. There was a full bar lounge on the second floor balcony overlooking Old Country Road through floor to ceiling plate glass. Pretty swanky.
The structural problems and the beginning of the summer blockbusters took its toll and the theater was sold and, as stated, became the Racket Club. When they refurbished it, they were able to remodel the structure to eliminate the balcony problems.
The Racket Club (and health clubâ€¦ not much of a spa!) lasted a few years before becoming a retail store. It was then torn down when the entire Roosevelt Raceway properties were sold and the current incarnation of retail/restaurants popped up.

Remember when theatres would throw in re-issue garbage like this in early December right before they opened their holiday attractions?
View link

The theatre was first run, road show in it’s early days. I remember seeing Thoroughly Modern Millie there. I would presume that the Century Roosevelt Field was a contributing factor to it’s demise. The only other theatres in the area were the old Westbury on Post Avenue which was not first run and the Salisbury which resorted to adult films to extend its lifespan.

rvb, I too saw “Thoroughly Modern Mille” at the Raceway when it was a very new house. As a matter of fact, I think that “TMM” was its first attraction. I’m dumbfounded to see that it closed after such a short lifetime. Your mentioning the old Westbury on Post Avenue dredged up memories of a midnight showing of Mick Jagger in “Performance” there.

The map location is off… it should be further West… across from Carle Rd in Westbury.

rafaelstorm; yes indeed TMM was the opening attraction it was a roadshow reserved seat presentasion which we showed with 4 track mag stereo sound

I believe I saw “The Lion in Winter” here

I agree with Marie…the map location shown is way off…I also remember it to be adjacent to Carle Road, just west of Fortunoffs. I never went to this theater, or even noticed it when it was open. I only have vague memories of it being boarded up for quite some time.

I was an usher at the Raceway Cinema from 1971-1973. It was a wonderful experience. I remember ushering for Deliverance for like 6 weeks straight.