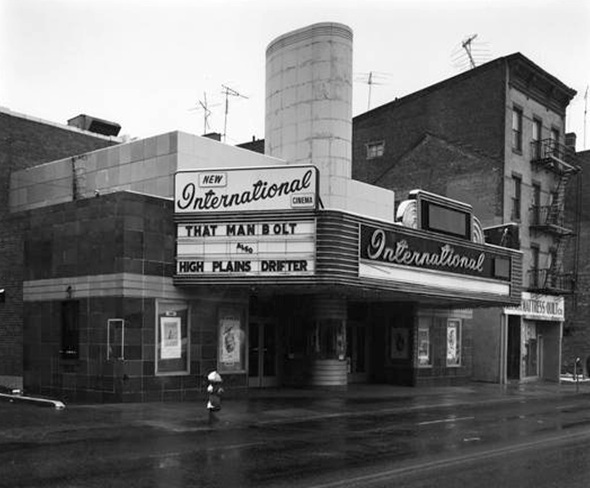 lm
thanks for this great site.

This photo pretty much sums it up:
View link

The Albany was located on the N (upper) side of Albany street which is the west – east road (left to right)in the photo. From your first posted photo, the Albany appears a few stores to the left of the one building left standing with the very prominent windows. J&J demolished the Albany along with the Rivoli which was located West (left) of the towers under construction where there are cars parked near the intersection of George Street. I believe that this parking lot has been turned into more scenic gardens today to cover up a parking deck.

The “before” picture of the same block:
View link

The Albany is the fourth building (including one empty lot) from the left of the building with the prominent windows (near the clover leaf) and behind the huge parking lot.

Beautiful photo can be found in the book “Urban Landscapes A New Jersey Portrait” by George A. Tice
The photo is from February 1974. That Man Bolt and High Plains Drifter are the features. The theatre’s marquee reads “The New International Cinema”

A picture of the Albany:

And another, somewhat older:

I remember my mom taking me to see “Gone With the Wind” for my first time. I believe it was at the International, because the only other theatre we went to, the Rivoli, I remember as showing mainly/only Disney films. I loved the curtain opening automatically, slowly, majestically at the beginning of the film, and loved their short intro to the main feature: “RKO International” (with picture of Medieval trumpeters) followed by “Feature Presentation” (with picture of a motion picture film reel moving). I can still hear the music background that went to this in my head and wish I had a copy of this intro! Thanks to those who provided the links to the old photos!

There was an entire “sub-circuit” within the RKO theatre chain called “RKO International 70” that was developed in late 1963, It was designed to be a deluxe set of houses (all 70mm equipped), including locations in Denver, Boston, San Francisco, Cincinnati, Columbus, Dayton, Syracuse, Rochester and the NY Metro area. The SOUND OF MUSIC ad posted to this New Brunswick house listing is actually for the Cincinnati theatre.

This opened as Albany on September 26th, 1936 and reopened as the International 70 on August 5th, 1964. Both grand opening ads in the photo section.

To Egcarter. To my knowledge ther never was an RKO International 70 built in the Boston area. Our 2 RKO houses from the 20,s became the Boston Cinerama in 1953 and later the other one became the Opera House much much later.