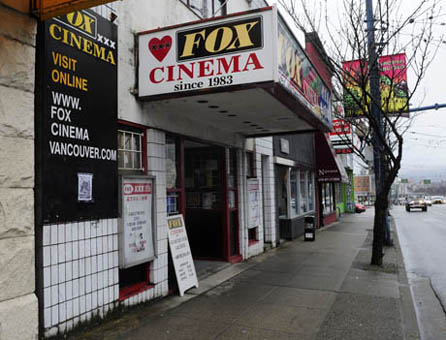 It was reopened as a nightclub, concert and live performance venue named Fox Cabaret.

I think the related site is defunct. Here is another photo:
http://tinyurl.com/yctnw8e

Here’s a link with photos before they started tearing the insides apart.

Most surprising thing I saw was probably the projector.

Does anyone know what happened to all the 35mm prints at this theatre ? Does the previous owner still have them ? I am a collector .

Yes, I do know what happened to the prints at the FOX, Markus99. Under the cover of darkness, they were illegally disposed of over a series of evenings in late 2013, the film canisters loaded into the back of a hatchback and dumped in garbage bins in alleyways behind Main street, Cambie street, and a couple of other streets as well. The next morning, I began to get reports from people on social media who were finding canisters here and there, but I would estimate that 90% of the 115 35mm adult films in the Fox’s collection were thrown away before they could be rescued. A few of them ended up in They Live Video, a local video store near 28th and Main. In fact, the sandwich board from the fox (which was also thrown away as well) is there at this time. The surviving prints were sold off to various collectors as of this writing, but it really pains me to know that 115 films, some of which were some of the few remaining prints left in the entire world, were chucked out so callously, especially when friends of mine had made an offer for them in the months leading up to the Fox’s closure. Just disgusting (and confounding) behavior by this one individual. We can only speculate why, but I’m pretty sure it was a mixture of “I’m insulted by your lowball offer” and “If I can’t have them, no one can”. Really disgusting.

Also, it’s worth mentioning that the new owners of THE FOX have retained its name, have done a wonderful job cleaning up and refurbishing the space, and have opened an excellent and vital live music/performance space for the community that has really been thriving since its opening this year. It’s really the best possible outcome for the theater if it can’t still be a theater. When I heard it was being closed, I instantly had visions of a Starbucks opening in there, so it was a relief to see how much care and respect for the heritage of the Fox has been displayed by the new owners, even if the old ones had absolutely none.

Also, if anyone is interested in reading about the pre-history of the Fox theater, when it was the Savoy theater — I’ve written an 8 page essay about it, which appeared in the 27th issue of Cinema Sewer magazine.

The old projection room has been fitted out as a cocktail and snack bar.

On the subject of Vancouver porn…for many years the Venus on Main Street and Golden Kitten on Granville ran all-day X-rated fare in the smelliest, funkiest cinemas on the West Coast. A very freaky situation if you didn’t know how badly those two places reeked. Towards the end, the Venus essentially became a crackhouse in which the dirty movies still ran but the customers' main concern was having a safe, dry place in which to smoke their rocks.