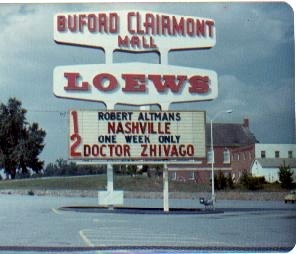 Great theatre, both in general and size when Loews opened it on February 10, 1971 with Dyan Cannon in “Doctors' Wives”. The theatre had two entrances, one via the mall interior the other through the parking lot. The theatre had 1,200-seats a large flat screen, 35mm and 70mm projection and a fairly good sound system for its time. When “Deliverance” came out in 1972, it probably played longer at the Loews Twelve Oaks Theatre than any other theatre in town.

On May 23, 1975 the theatre was split down the centre and two much smaller screens were installed complimented with mono sound. The theatre continued to do OK despite it’s loss of lustre (Robert Altman’s “Nashville” did a pretty good run there in 1975.) It became a four screen theatre on May 26, 1989.

When Loews left town, Storey Theatres took over the Twelve Oaks Theatre and George Lefont secured the Tara Theatre. The Twelve Oaks Theatre was clinging for life at that point and Storey did all they could to keep it alive including using part of the lobby for video rental and dividing up the two shoebox auditoriums into four. The theatre breathed its last in 1999.

I don’t know if it is still standing or if it has been converted to retail space.

You must have worked for several theatre chains ROBIN!

The shopping center is now called Plaza Fiesta and is primarily a Latin/Spanish shopping center, with a few Asian run stores as well. Most the the Buford Highway corridor has a more ethnic bent now than when I grew up there. The glass wall that separated the theater from the mall has a huge climbing/kids playhouse thing there, blocking the entrance.

Makes me sick how all the theaters I loved in Atlanta are GONE or changed drastically to the point they barely resemble the place they use to be. Doraville Mini Cinema GONE. Loew’s Tara GONE (the single screen) Briarcliff Village Theater GONE. Loew’s Grand GONE. Roxy Theater GONE. Toco Hills theater GONE. N.E. Expressway Drive-In and North 85 Drive-In theaters GONE. Original North Dekalb theatre GONE. I could go on and on, but you get the point.

This opened on February 10th, 1971. Grand Opening ads in the photo section. This is the second theatre built by Loew’s in Atlanta named after the estates in “Gone With the Wind”.

When I Looked On Maps, I Think That Location Is Demolished. I Can’t Find It Anywhere.

Probably the biggest nail in the coffin was the opening of Regal’s new theater at the sight of the North 85 drive in.

Two pictures from the summer of 2020 posted in the photo section. One is a match for the picture currently above the overview which was from August 1975. The other shows the lobby exposure from the parking lot. The current nightclub / concert venue which had done an elaborate reconstruction of the lobby is of course closed for the Covid bug. It may be closed for good as there is a For Rent sign on the lobby glass wall.

This place was never a big success for Loews. Like most theaters it had its moments such as Clockwork Orange and Deliverance in 1972, but it was the last single screen first run house built in Atlanta. The only time all 1200 seats were full was in the fall of 1972 during the first few weeks of Deliverance. As a twin it had capacity crowds for Nashville in 1975, Silent Movie in 1976, Heaven Can Wait in 1978, and its last Loews hit, Bring There in February 1980. The only times that both sides were busy was in 1976 with Silent Movie and Outlaw Josey Wales and 1977 with Julia and Turning Point, both of which would have done better down the road at Tara.

As an example of how hard it was to make money in those days, Nashville, the last movie to play there during my manager days, had numerous sellouts and grossed $90K for its 22 week run. However, the advance was $92K so they made nothing at the box office that summer and since it was R rated and 3 hours long there was not a lot of concession business either. Also, Loews subbed out their concession stands to ARA so they didn’t get the full benefit of that anyway.

And then there was that odd Parkside episode in 1974. No wonder that by the end of 1980 they had packed up and left town.