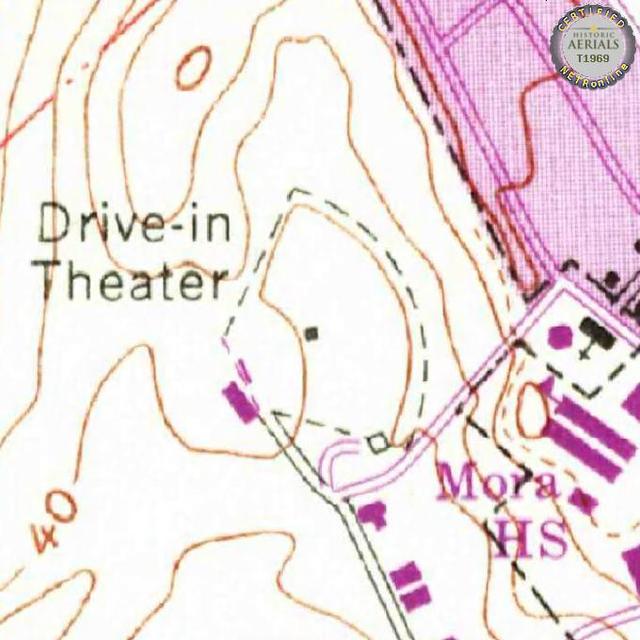 This Drive-in opened in the 1940’s. It featured a reinforced concrete screen tower with the theatre’s name painted on the back, facing North Main Street across what was originally a vast empty field, but which later was developed. The theatre’s presence was heralded along North Main with a freestanding two-sided sign and reader board. Atop this was a tall metal spire which featured a stack of neon rings. The neon signage read “Starlite” above the reader board, and “Drive-In Theatre” below. This sign tower had an exact twin at the Starlite Drive-in in Merced, now also long gone.

With the advent of wide screen movies, reinforced extensions were added to the right and left edges of the screen tower.

By the 1970s, the partnership of Hank Garcia and James Andrade operated the Starlite Drive-In, using it for first run Hollywood product, while their operation of the Fox Theatre downtown catered mostly to Spanish-speaking audiences.

The Starlite Drive-In closed in the 1980’s and was subsequently demolished. The sign and reader board out on North Main Street remained for a brief period, with its last message, “Bye” in the middle. It its last years, only the neon of the Starlite name (in white tubing) lit up, aside from the reader boards.

The site of the drive-in is now occupied by Starlight Elementary School. It was decided to spell the name differently from the name of the theatre, for fear of new generations of children learning to spell “light” as “lite”. The idea was advanced at the time of the Starlite’s closing of perhaps saving the screen tower and painting a mural on it, but this never got beyond the talking stage.

Some of the pine trees which originally bordered the drive-in still act as a border for the school.

Santa Cruz had a drive in and still does. It was a small distance from the Starlite in Watsonville. It was called the Encina DI in the 50’s and 60’s. The new name is the Starview I think now and is still open. Do you know If the Encina was run by the same people that ran the long gone Starlite in Watsonville? They also has a DI in Boulder Creek CA in the 50’s had a name like the Starview I think? This was run by the same people that ran the Burl Theatre in Boulder Creek CA. At least Santa Cruz still has a Drive In with two screens and a flea mrkt on the weekends. Why is it not listed on Cinema Treasures? Can you do some checking and get the Encina or it’s new name up in the Santa Cruz listing. Looking forward to the big THS conclave in 2008 in this area. Wait till the people on the tour see the Delmar in Santa Cruz and the State Theatre in Monterey.

Just to add to the above post: The Drive-in still in Santa Cruz is the Skyview. As of this writing, I believe it is still operating. I went there a few times in the 70s to see Disney’s “Robin Hood,” and Robert Redford in “The Great Waldo Pepper,” and a couple of others. I will be a bus captain for the THS ‘08 Conclave. I’ll be sure to point out the Skyview as we pass it.

Santa Cruz’s Encina/Skyview Drive-In is now demolished. There are no more drive-ins in Santa Cruz County.

I have neglected to mention that I have an address rubber stamp for the Starlite. I found it in a desk drawer on the third floor of the office block of Monterey’s Golden State Theatre, when UA was doing a garbage purge of the theatre in about 1992. What the stamp was doing there is anyone’s guess. It dates before the era of ZIP Codes and the current abbreviations of states (Calif., not CA). Occasionally I stamp it on my ink pad and put it on the backsides of envelopes I mail to fellow theatre historians and enthusiasts.
The stamp reads thus:

I was pretty much raised at the Fox and Startlite theaters.

Does anyone happen to have photos of the Startlite from back in the day? I’m a songwriter and am working on a project that uses the drive-in as it’s main graphic motif.

Note: If it’s okay to post a link, here’s a bit more info about it:

Gary – Do you still have that Starlite stamp? ;)

mhgaither: Yes, I still have that Starlite stamp.

Hi all, I remember going to see movies there when I was a kid with My Family I also live across the street from it,

Opened in 1949 and closed on September 9, 1988 with Walt Disney’s “Bambi”. During its earlier years, it was known as two names as people can call the theater the Starlite Drive-In or the Watsonville Drive-In by advertisements.