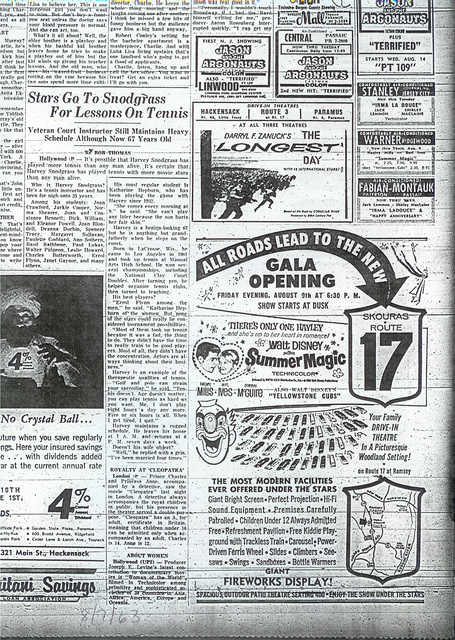 Bill: Another one of your ads from 1966, showing the location as Ramsey:

The drive in was located on Route 17 south. The marquee and entrance was located next to the Bel-air motel and across the highway from Anchor Rent-all. Today, the entrance is being used for the industrial park that stands where the drive in used to be. Pity. Many great memories are buried there.

For my parents and me, this was THE place. As a kid, I loved the miniature train that you could ride around the property before the movie started. Whenever I smell fried chicken, it takes me right back to the Route 17 drive-in, and it’s snack bar. Deee-lish! I can still remember the ads for many local Rockland and Bergen businesses that would run between the features. They played many great films at the time; Planet of the Apes, Batman, You Only Live Twice, El Dorado, and too many more to mention. Unfortunately, the place was only open about 15 years. I think it closed in the mid to late 70’s.

The 1963 IMPA has one drive-in in Saddle River called the Route North 6 Drive-In. By 1970 the listing is Route 17 Drive-In. Operator was Smith Management and capacity was 1100 cars.

I pretty much grew up at this place my mother ran the concession stand,she worked there from about 1963/4 till 1972/73,at one time or another all of our family members worked there in some capacity.My older brother worked it when he was home between tours from Vietnam.When my sisters girlfriend from Indiana came out she worked it also.Even my grandmother from Indiana helped when she was visiting,she was scooping out the yummy Italian Ices.“100 and 1 Dalamations”, I’m pretty sure that was our busiest night, I think we hit over 1000 cars.When it was real hot and muggy we’d bring folding chairs up onto the roof,(we’d go thru the projection room) and watch.I spent many hours with Jerry he was the projectionist,he worked in NYC as a lighting man or a desgner in the day.In hockey season I’d bring my table hockey set “upstairs” and we’d play between reel changes,it was the place to be in the winter cause it was so hot from the huge carbon- arc projectors.In the summer sometimes I’d spend time in the “Walk-in” that was a big cooler in the “back room” we’d keep all the cold items for storage.The drive-in is where I’d spend most summer nights, we’d get there early,about 6 or so to start everything up.A lot of the time I’d roam about, the property itself was very big, I used to sell cigarettes from behind the counter when the machine was broken,(try that today).There was also another guy who managed it the other nights.We had many high school/college kids working there.It was open almost all year,I’m pretty sure it was closed only a few nights a year.Yes it was open even in the winter,even Christmas eve,and yes we’d get people.I remember plowing snow with my future brother in-law, he was a “ramp-man” with the old army jeep that was our “Ramp” vehicle.Back then some of the movies were controversial,the Violence of The “Hells Angels” drugs from “A Clock-Work Orange” or “Midnight Cowboy”, now we see that on TV nightly.Also it showed X-rated movies, yes they did get banned.Those nights I’d have to stay in the back room(with the door shut).We would walk to all the cars and hand out free passes if it got to foggy or rainy and you couldn’t see the screen good enough,sometimes you’d see more action in the cars “out back” than on the huge screen,The young dates would park in the rows from the play ground back for “privacy” but the bummer was the back section in the far corner was kinda soft and swampy and some of the cars would get stuck or sink through the gravel if they were a rockin to much, this would happen in the spring time mostly, then we’d have to rope those areas off.We had a section in front of the concession stand for a while that had a few hundred wooden slatted seats,eventually they rotted and they got pulled out, don’t think they ever got replaced.I’ve saw a million movies there,oddly I can remember scenes like it was yesterday, It was a great/fun place for many,especially me.It would make for a cool movie about all the stuff that went ON AT the Drive-In Movies. tc

I was one of those snack bar college kids (actually, college-bound as it was the summer of 1970, just before I headed off to my freshman year). That was summer of “The Dunwich Horror,” “Woodstock” (the movie) and the unforgettable “Beyond the Valley of the Dolls.” I always felt sorry for the snack bar patrons as unsold hot dogs and hamburgers were usually put in the walk-in cooler and reheated & served the next day. As for the confusion about whether the theater was located in Ramsey or Upper Saddle River, it was located on a small bump of USR that’s separated from the rest of the town by Route 17.

Approx. address for this drive-in was 209 New Jersey 17. The entrance was south of this location. The screen and the exits were closer to Pleasant Ave.

Greetings everyone! My father Glenn Cline used to work in the concession stand, Chances are I have met some of you! Would love to see pics of the place if anyone has any!

Tacoles I think the other guy you were talking about that managed the other nights was my dad. I remember inventory time having to count all the candy in the cage. Cash was called cold cash because it was kept in the cooler over night. My movies to remember was silent running, planet of the apes, many others. I always wished the merry go round worked. Looking for lost change was always fun.