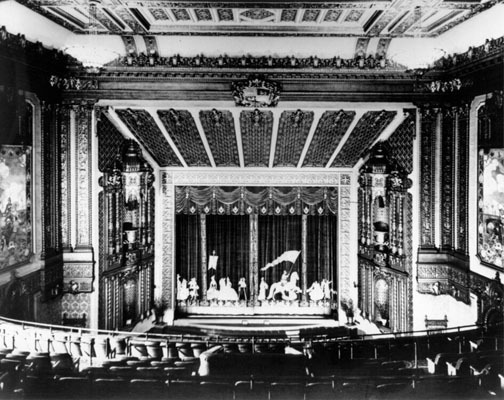 Located about half a block away from the Golden Gate Theatre and the Warfield Theatre. Opened as the Granada Theatre on November 17, 1921 with Marion Davies in “Enchantment”. It was built and owned by lawyer/exhibitor Herbert L. Rothchild, and Paramount Publix were a major investor (they took full control in 1925). It had an operating staff of 122 people. It was renamed Paramount Theatre on January 31, 1931 following a remodel.

This opulent, Andalusian-style movie palace became part of the Fox West Coast Theatres chain who took on the lease from 1934 until 1947. In addition to its opulent interior, the Paramount Theatre also contained a 4 manual, 32 rank Wurlitzer organ which was opened by organist Oliver Wallace. The organ is now installed in the Regent Theatre, Melbourne, Victoria, Australia. The stage was equipped with a stage elevator, said to one of the first in a motion picture theatre.

The Paramount Theatre was closed on April 20, 1965 with Elvis Presley in “Girl Happy” & Nancy Sinatra in “Get Yourself a College Girl”. It was immediately demolished and was replaced by a low 2 story building which contains retail units. You can still see the outline of this now-demolished theatre in the façade of the adjacent building.

Also seen on the above color picture postcard view is Kress Variety Store that was formerly the Pantages Vaudeville Theatre. Does this building still stand?

You can hear a recording of a live broadcast of the Paramount Wurlitzer almost at the end of its life at this site:

When a Louise Brooks film first played in San Francisco, it was at the Granada Theater on Market Street. “The Street of Forgotten Men” opened there on August 8, 1925 and played for a week.

The Granada Theater was part of Publix, a chain of movie theaters allied with Paramount – Famous Players Lasky. As a result, all but two of Brooks' 1920’s Paramount features opened in San Francisco at the Granada. No other San Francisco theater can claim to have locally debut as many films. The other films which opened there include

I am doing a drawing of the San Fransisco Granada/ Paramount theatre. Does anyone know the colors of the auditrium…the walls, curtains,ect.? The drawings are for sale through this site. .edu

I can’t find anything about the colors of the interior of the Granada, but the facade was certainly colorful according to a rather effusive report in the trade Journal Brick and Clay Record, issue of December 13, 1921:[quote]“BEAUTIFUL TILE WORK IN ‘MOVIE’ THEATRE

“What is probably the most luxurious picture theater west of Chicago was opened in San Francisco, Cal., November 17. It is happily named the Granada and represents an investment of more than $1,000,000. The building is in Spanish-Colonial style and equipped throughout like a king’s palace. One of the most distinctive features of the Granada is the work in colored tiling in the facade around the great windows. This work was done by Eri H. Richardson of San Francisco, who has scored a triumph which has caused most favorable comment among architects of this city. Some go as far as to say that the facade tiling is not unworthy of some of the great masterpieces of the fifteenth century, the materials being translucent, turquoise blue, golden luster, rose and iridescent hues. The tiles mere made by Richardson from original designs, the motif being California fruits and flowers. The original suggestions were offered by a Moorish pattern of a design in the Alhambra and these were supplemented by color ideas obtained from the workings of a kaleidoscope. The two fine towers of the facade are distinctively characteristic of the Spanish-Colonial churches in Mexico, and are laid in a herringbone scheme of yellow enameled tiles with blue dots, and offer a brilliant bit of color to crown the rich polychrome beauty of the whole design.”[/quote]I’d love to see color photos of the facade before the tile work was lost (as it apparently was by the time the 1965 photos were made.)

Standing on Market St, looking to where the entrance to this theatre was (above the current row of storefronts), one can see a mural on the side of the left-hand, corner building, that looks like a Spanish courtyard, as seen through arches. It’s quite colorful. Was this mural part of the theatre’s original lobby? If so, I am amazed it is still there, though it looks like it is part of the original wall of the theatre building, and possibly could not be removed during demolition.

It’s a mural placed there by San Francisco’s Arab community in 2003:

The Wurlitzer organ from this theatre was installed in the Regent Theatre Melbourne in the mid 1990’s.

November 17th, 1921 grand opening ad as Granada can be found in the photo section.