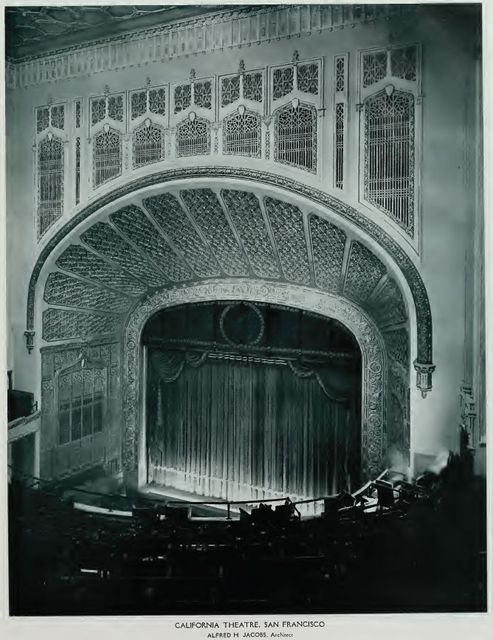 Designed by architect Alfred Henry Jacobs, who also designed San Francisco’s Granada Theatre and Curran Theatre, the Gothic style California Theatre opened its doors on Thursday, November 1, 1917. This was just before the Armistice that ended World War I, and newspapers of the day took only minor notice of the theatre’s opening. The papers were full of talk regarding the war, but some publicity was planted in the Chronicle and Call Bulletin papers by Herbert L. Rothschild, the attorney who developed the California Theatre.

Built on the corner of 4th Street and Market Street, the small lot on which it was constructed restricted a mere 40 percent of the 2,134 seats to the main floor, all other seats were in the balcony. Neverless, Rothschild and his producer Jack Parkington, had a keen business sense, and turned the California Theatre into a thriving movie house, San Francisco’s first real movie palace. The California Theatre was equipped with a Wurlitzer 4 manual 32 ranks theatre organ.

Almost four years to the day after the the California Theatre opened, Rothschild unveiled his newest palace, the Granada Theatre three blocks up across the other side of Market Street. Ironically, this was part of the ‘movement’ of Market Street cinemas further west in the coming years, culminating with the 1929 opening of the Fox Theatre at 8th Street and Market Street.

By the late-1920’s, the theatre district was so far west, that the once popular California Theatre had to struggle to survive. Given a fresh façade, and renamed State Theatre, the old theatre reopened on New Years Eve of 1941. After struggling for years with sub-standard bookings and little foot traffic, it was finally closed in 1954, and subsequently demolished in August 1961.

Regarding the comment above by Adam Blankenship, the SF California?State Wurlitzer is NOT installed in the Fox Theatre Visalia. Only the 4 manual console from the SF Cal/State is in Visalia.

The remainder of this large, historic instrument was broken up for parts. Ron Downer of SF has some dramatic photos of the stage house walls coming down with the 32' Diaphones coming down as rubble as well. Between Ron Downer, Dick Villemin, and Ed Stout, most of the rest of the organ was removed and saved, but used as parts—not a complete instrument.

Dick Villemin restored the Cal/State console for his sister Ruth’s home Wurlitzer which she had in her home in Malbu. The rest of the organ was from the Palace Grande Theatre in LA via the Elmo Theatre in San Luis Obispo.

Mrs. Villemin-Dresser is to be commended for donating this wonderful organ to the Fox Theatre in Visalia. Shame on the Fox Visalia for NOT presenting this organ more often OR allowing better access to the playing of the instrument!

Thanks for the verification. I saw two separate references to 4th and Market and wasn’t sure if that was correct.

The State can be seen in the film DOA, with Edmond O'Brien.

Kewpie: The theater in the drawing you linked to is the former Loew’s house that is listed at Cinema Treasures as the Warfield Theatre. It was never called the State. It was named for Marcus Loew’s business partner, actor David Warfield, who was born in San Francisco.

Also, I notice that there’s been some confusion surrounding the exact location of this theater (ken mc and Chuck’s comments of June 4, 2006.) The confusion comes from the fact that San Francisco’s numbered streets don’t match up with the address numbers (it’s the same situation as in Manhattan.) The numbered streets begin at the old shoreline of the bay, which was about half a mile inland from where the current shoreline is, but street numbers begin at the Embarcadero, along the modern shoreline. Thus 4th street marks the end of the 700 block and the beginning of the 800 block on Market Street.

The photos ken mc linked to on August 26, 2009, show that the State Theatre was definitely on the southeast corner of 4th and Market. The old skyscraper next door to the theater is the former Humboldt Bank Building, which is still standing at 785 Market.

I’ve come across this rendering of the California Theatre in the December, 1917, issue of The Architect and Engineer of California. The problem is that it is part of a portfolio of recent work by architect Louis Christian Mullgardt, not Alfred Henry Jacobs.

The August, 1918, issue of the San Francisco-based journal The Architect has three photos of the California Theatre, and attributes the design to Alfred H. Jacobs (scan at Google Books.)

Naturally, I’m a bit puzzled. Did Jacobs and Mullgardt collaborate on the building? Did Jacobs design the theater and Mullgardt the office and commercial parts of the structure? Can anyone clear up this mystery?