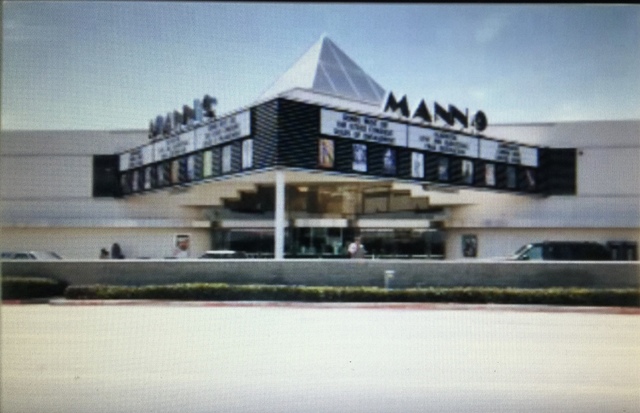 The Mann 9 Theatres was opened March 22, 1991. I remember this theater as my first job!! When I was hired on the manager was a delightful little guy by the name of Neal Underweiser. The assitant managers were Grace, Alice and Mark –all very nice people. I remember the busy Saturday nights, the smell of freshly popped popcorn and butter in the air, and most of all I remember my fellow ushers and concessionists. I love you guys and always will, you forever have a place in my heart. I remember the best movie shown was “Titanic”. I never saw an opening for a movie be so huge. So many people came out for this movie opening night, and this movie did so well that it set a record of being the longest running movie at Mann 9. It showed in the theater for an entire year!

Hi my name is Dhel. I was one of the assitant manager there as well. I was hired there 5 months after it had opened. I also came from GCC or the Galleria Cinemas at the SouthBay prior to Mann Del Amo 9. I left around the latter part of 1994. Sorry DeShaun your more likely hired after me. Wow this is a good flashback from the past. I was hired there by it’s first GM, Mr. Rick Pulsipher a.k.a Mr. P. He loves his Gypsy Kings CDs that it’s blasting loudly from the atrium lobby speakers. Yup, Neil Underweiser was the next GM which usually parks his Red Saleen 5.0 Ford Mustang in the front of the box office afraid it of being stolen. Oh and Kevin Webster another assitant manager the one w/ jerry juice curls (lol..)and collects comics. Those Tuxedo uniform is such a drag. I also remember after work my colleagues and I would go to the park by the del amo park, buy a big block of ice and slide over the grassy slopes while intoxicated. Or go to redondo or hermosa beach at night and get wasted. It’s sure was one of the best times of my life! And the other best thing there was that I met the love of my life and future wife, Pearl(also an asst.mgr). I have so much great employees that became great friends there. Hey if anyone of those friends or alumni from Mann like to reminisce and catch up, you can email me at
Thanks! God Bless!

The AMC at Del Amo is doing well. This is across Carson from the former Mann 9. There is a new BJs Brewery and Jerry’s Deli along with PF Changs and the rest. This area has grown considerably from when the two choices were the Mann and the UA on Hawthorne.

Wow— I saw only one movie there, and at the time thought it was the next generation of theaters, taking over for the old UA Del Amo and Mann Old Town theaters.

And then in a blink of an eye it’s gone, too.

Nothing like the life cycle of movie theaters to give you some perspective.

Hi, my name is Beth and I worked at Mann 9 Theaters from the day it opened in March 1991 till the day it closed, December 2000. I remember going on the interview carrying my 9-month-old son, Joey, in his baby carrier. For all that remember him, he is now almost 19 and going to college. In the very beginning we were trained as ushers at the MB Mann 6. Our first big movie was â€œTeenage Mutant Ninja Turtles.â€ We had contests for the Academy Awards. We even had a few movie stars come for private screenings. We also had a softball team for a while. We were so sad when Mr. P left, we made him a movie of all of us. Do you remember that Dhel? And I will especially miss Mr. U, may he rest in peace. I also believe one of the theaters was haunted. I hope L.A. Fittness isnâ€™t too scared of ghosts! I started out as an usher and eventually became permanent ticket taker until the day it closed. I loved my job. It was the best theater EVER. Itâ€™s been a lot of years now, and thereâ€™s too many names to mention of the people I worked with, Security included, but I just want to say it was fun and Iâ€™ll always remember the good times.

omg hi Beth, The best ticket taker in the world! yup, i still have a copy of the mr.p video. I posted my email addr. from previous post, if u have time email me and we can catch up some more!

There is a shot of the Mann 9 about a minute into this video:
http://tinyurl.com/ngh29p

Hi I’m Ann… I also used to work at Mann9 back in the days.. I remember I’m one of the girls who works at the concession stand and I’m the one who always get the Top Seller of the Week Award who always sells the highest amount of popcorn, super big deals- buy a Large popcorn you’ll get a free drink with free refills..which I think one of the best deals back then. Niel the manager and the rest of the team Mann 9 are all nice people!! I had so much fun working with great team of people! Btw, can anyone tell me how can I reconnect with them? I remember Grace, Carmen, Robert, Mayann, Cris, Mark, etc.. Anyone wants to drop me a message feel free to email me . I would love to see how’s everyone are doing.. Thanks!! :–)

As seen by the Street View, this theatre is now an LA Fitness gym.

Hi, my name is Tony, i worked for the construction company (SLP Inc.)that gutted an old Ralphs grocery store and turned it into the Mann 9 theatre in 1991, I was there from project start up to grand opening, it was a fun job, Meeting the Ninja Turtles was cool,I see the Gym decided to keep the skylight we put in, a lot has changed since 1991.

This opened on March 22nd, 1991. Its grand opening ad can be found in the photo section for this cinema.