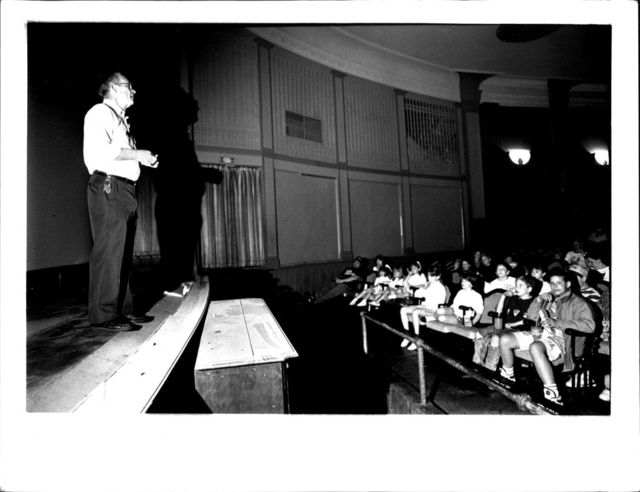 While the Liberty Theatre doesn’t strictly fit the normal description of a movie palace, it has, however, been a landmark in the city of Puyallup for more than 75 years. During most of its run, it was owned by the Barovik family.

Opened on August 19, 1924, the Liberty Theatre featured vaudeville, then movies. Until recently, the theatre was operated by Reel Entertainment, which used it to show second run features. However, when two newer theatre complexes (a six-plex and a 14-plex) were opened nearby and forced an older, nearby 6-plex theatre to convert into a bargain house, the Liberty Theatre was closed.

It was then sold to Mr. Tom Newmann, who tiered the sloping floor and restored the rest of the theatre to its original state, making it into a first class venue for banquets, receptions, and corporate meetings. By 2018 it became a live theatre operated by ManeStage Theatre Company.

The marquee was painted with house paint and looks bad. The awning over the sidewalk was hit by a truck and also looks bad. The current owner removed all the projection and sound equipment.

Dominic Constanti built the Liberty in 1924 for $70,000. It had a stage for vaudeville performers and even a Wurlitzer organ. Mike Barovic – then the theater manager – married Constanti’s daughter, Andrea. When Barovic purchased the theater in 1939, he renamed it Barovic’s Liberty Theater.

He became a major commercial property owner in Puyallup and owned many movie theaters, including two in Tacoma, two in Puyallup (the Liberty and the Roxy), and one each in Sumner, Parkland and Aberdeen. He was part-owner of the Fife and 112th Street East drive-ins.

When Tom Neumann bought the Liberty in 1999, he said he’d keep the Cinemascope screen and projector and might show movies on special occasions.

An article about the Liberty:
http://www.fifefreepress.com/article/767

“What’s your name, sweetie? How old are you?”

Her name is Mariah, says the girl sitting in the front row of the large movie theater. And she’s 10.

“We’ll sing `Happy Birthday.‘ Are you agreeable? If not, we’ll throw you out!” jokes the man with the microphone and the ready smile.

The audience claps, then sings a rousing rendition of “Happy Birthday” to Mariah.

Bud Dunwoody, proprietor of the Liberty Theatre, isn’t quite ready to dim the lights and show “White Fang,” a second-run Walt Disney movie.

After reminding the patrons to keep their feet off the chairs in front of them, keep their trash off the floor and enjoy the movie, he has a few more words of advice.

Be sure to buckle your seat belt on the way home, have a beautiful day tomorrow, and above all, “Say no to drugs. They can and do kill you.”

Kids may not take Dunwoody’s words to heart any more than they do the advice of their own parents. But in an age of faceless, electronic entertainment, they are offered something personal in this throwback to another era.

Going to the Liberty is more than going to see a movie. It’s an experience.

“In most movie theaters it’s more an entertainment situation nowadays than a social gathering,” says Dunwoody. “I’m trying to make it both. I want people to come in and have a good time and see a good movie and have a good feeling.”

It’s a formula that seems to work.

When Dunwoody took over the theater nine years ago, it was in decline, showing movies only three nights a week. Now the 600-seat theater is open every day, sometimes selling out its regular $2 shows as well as its $1 weekend matinees.

Dunwoody’s trademark opening act, with its tribute to the birthday boys and girls, didn’t start out in a lighthearted way. The first time he stood in front of the audience, it was to deliver a furious warning to the teenagers who had been disrupting shows with their loud socializing.

He threw out the troublemakers and solved the discipline problem. But he continued his practice of standing before the audience and saying what was on his mind.

The quintessential family theater, the Liberty not only offers fare for the whole family, it’s family-run. Working at the 67-year-old theater with Dunwoody are his wife, Patricia, his daughter Christy, his granddaughter Jennifer, and his son Dennis, who now manages the theater five days a week.

Of the children in the audience, says Dennis, “We call them our kids when they’re inside our theater. When they go back out, they’re their parents' again.”

The Liberty does show some films aimed at older audiences – “Awakenings” and “Dances with Wolves,” for example.

The theater once showed “The Abyss” even though it included some adult language and offered a glimpse of the heroine’s breast. That glimpse was acceptable, Bud Dunwoody explains, because it was brief and because it occurred while the woman’s husband was trying to revive her.

He censored the “F-word” in a recent film by turning the sound off momentarily. But Dunwoody dismissed one patron’s complaint that Demi Moore showed “too much cheek” in the hit movie “Ghost.” “They show more on these TV ads for swimming suits than we see in these movies,” he says.

Although Dunwoody chooses not to show R-rated movies at the Liberty, he has no objection to theaters that do. In fact, he shows “some of the better R’s” at the Neptune Theatre, which he has operated in Long Beach, Pacific County, for the past three years.

One kind of film he won’t show at either theater is the popular slice-and-dice horror genre: “There’s enough violence in the world without putting it on the screen.”

Born in Alabama and raised in Georgia, Dunwoody got into the theater business after retiring from the Air Force in 1969. His brother-in-law offered him a job as a management trainee in a Renton theater. He managed theaters in Tacoma, Seattle and Portland before buying the Liberty.

So he’s still at his small-town theaters several nights a week, greeting customers outside the box office and giving his cornball spiels that are as much a part of the show as the movie itself.

What about the warmup act on the nights Bud Dunwoody isn’t at the theater? He took care of that when he asked his son to manage the theater – and insisted that he continue the tradition of addressing the audience.

Dennis Dunwoody was uneasy about it at first. But, his dad says proudly, “He’s just like a duck in the water now. In fact, he’s probably just as crazy as I am.”

Here’s an item from the September 13, 1924, issue of Exhibitors Trade Review:

D. Constanti opened his Liberty Theatre, Puyallup on August 19. Invitations were issued to all of Film Row, and a good crowd went down for the ceremony. This makes Constanti’s second house within six months. The Liberty, Sumner, built by him, was opened in the Spring.“

Here’s the latest about the Liberty from their Facebook Page. Let’s all support the new owners!

The Barovic/Constanti family wants to thank the loyal Puyallup and surrounding community for a almost century of dedicated patronage to The Liberty Theater. Mike Barovic and Dominic Constanti together in 1924 built a amazing, majestic, and one of a kind place. Many people have fond memories and stories of their time in the Old Gal. However, the family has decided it is time to pass the torch. As a granddaughter of the former owner, Mike, I share our gratitude to all the people who have had a part in her ( The Liberty ’s) stories. Be assured those stories are not over. It is with careful consideration and selection that a new owner was chosen to continue with commitment, to the history, traditions, and concern for keeping The Liberty as a historic community treasure for generations to come.

The Liberty Theater will now become the permanent home for the ManeStage Theater Company, a non-profit community theatre established in 2008 that has produced over 70 Broadway style, family oriented productions in its former location, The Sumner Performing Arts Center. ManeStage works with hundreds of local volunteers to produce year round high quality productions and youth education programs.They are greatly looking forward to serving the downtown Puyallup community through the arts! Over the next 3 months, ManeStage will be restoring and revitalizing the beautiful Liberty to bring new life and excitement to this downtown treasure! For more information please visit their website at: www.manestagetheatre.com

Again, Thank You All, for your years of loyal support. Here’s to the new future ahead!!! (This FB page will be closed the end of August.)