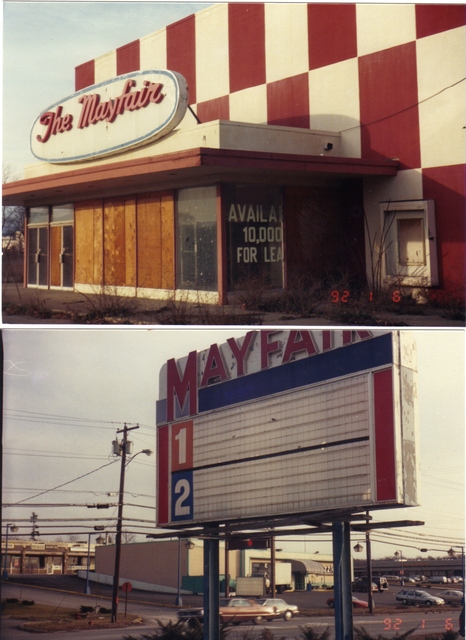 The Mayfair Theatre opened as a single screen 900-seat theatre on March 25, 1967 with James Coburn in “In Like Flint”. It was operated by Walter Reade Theatres. It was twinned in 1979 and closed in the 1980’s. It was demolished in 1994. and an auto dealership now stands on the site.

The Mayfair was at one time a Walter Reade Theatre. It was located across the street from the current Hudson Valley Mall, and has been demolished for parking.

The building is not demolished. It was converted to a tire dealership and remains open as such. That conversion would have entailed a whole lotta concrete, to level out the sloped floor. The “screen” end of the floor was below the water table, and that end of the building tended to flood. A sump pump was brought in to mitigate the problem, but you can imagine how annoyingly loud that would have been during a show. I worked in the Mayfair, first as an usher, and later as a projectionist, on and off from 1968 through 1978. I spent many an evening climbing up a ladder to change the marquee shown in the photo above. It opened as a single-screen theatre with 900 seats in 1966, and was twinned in 1979. I think it closed for good in the early ‘80’s.

I have to say that I remember as a young boy. I am about 30 now driving to Burger King which was in the front of the Mayflowers parking lot and seeing this building as it is in the picture above. I think it would have been cool to get to see the inside of the place before it became that tire dealer. The front of the building has the same layout but the colors have changed and the theater part is gone of course. It was cool to see even when it was all borded up

Right when it twinned in 1979, it was the second theater in Kingston to have more than one screen, with the first being the Kingston Triplex Cinema (first known as the ATMC Cinema, which will have its own Cinema Treasures page soon) which operated from June 1978 until the second quarter of the 1990s.

Sad to say is that the Mayfair Theater was demolished in 1994, and as of now a Volkswagen dealership (Romeo Volkswagen of Kingston) now sits in the site.

Thanks 50sSNIPES- id like to see photos of the Kingston Triplex… so glad I drove out to Kingston back in ‘92 to take the pictures above.