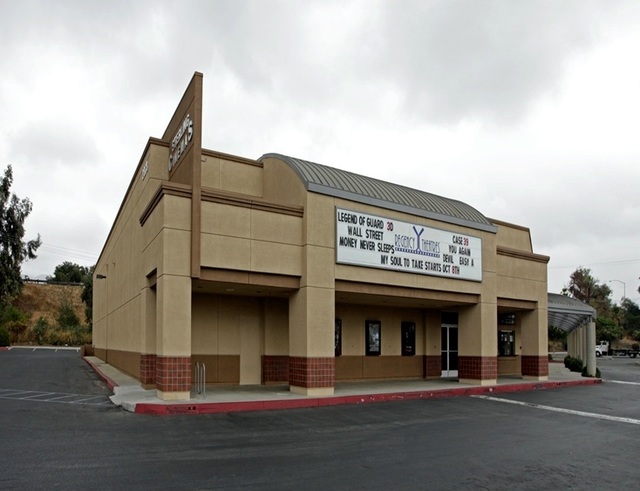 The Family Twin Cinema I & II opened on March 28, 1973. Each auditorium had 240-seats. In 1991 it was taken over by American Family Cinemas. It was rebuilt to the plans of architectural firm The Henry Architects as a 6-screen theatre which was opened November 18, 1994 as Sterling Cinemas.

This cinema is now operated by the independent chain known as Regency Cinemas. They seem to be a respectable operation which seems to take over smaller more depressed cinemas to keep them from closing.

The web site of Seattle architectural firm The Henry Architects lists the Sterling Cinema 6 in San Bernardino as one of their projects. There is one photo of it in their slide show.

The Family Twin Cinema I & II launched on a 20-year lease with “1776” on Cinema I with “Snowball Express” and “The African Lion” on Cinema II. The theatre had two identical 240-seat auditoriums which featured automated equipment and promised family fare. American Family Theatres Circuit took on the operation in 1991 taking it to end of lease.

Family then spent $2 million converting the theatre to a six-plex called the Sterling Cinemas. It re-launched the venue with a benefit screening of “Priscilla, Queen of the Desert” on November 16, 1994 followed by a full slate of films at the grand opening to the public the two days later.

At the half-way point of the its second 30-year lease, Regency Theatres bought out the Sterling Cinemas location in November of 2009 giving it another modern refresh. It was still operating into the 2020s

This was originally announced as another automated franchise by United General Corporation in August of 1972. United General was racking up lawsuits about the time of the groundbreaking. It opened March 28, 1973 with “1776” on Cinema I with “Snowball Express” and “The African Lion” on Cinema II