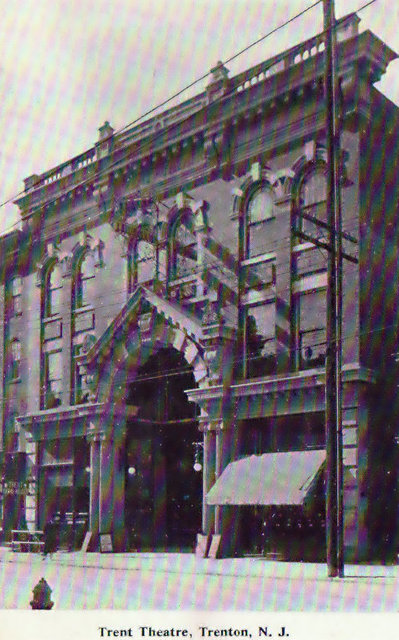 The Trent Theatre opened December 7, 1903. This theatre closed in 1972 and was demolished in 1976. It has been replaced by parking and a part of a realigned Hanover Street.

“About two doors closer to State Street (the main street of Trenton) was the Trent Theatre. Much smaller than the Lincoln Theatre, no balcony like the Lincoln, but a very nice house none the less. I’d guess maybe 900 to 1,000 seats. It was RKOs #2 first run house, had a good run of product and was a successful theatre for years. I’d have to go back and look to see if the buildings are still there”.

Thanks Hondo, I’m fascinated by tales of the bustling streets of the mighty cities of the 30’s and 40’s. It’s such a shame what has befallen cities like Bridgeport, Rochester, St Louis and most of all Camden and Detroit. I do believe that cities are the future and some are poised for significant comebacks, like Newark, Pittsburg and Buffalo. Trenton is kind of lucky that at least it has the business of government, but that’s pretty dull. Such a shame that there doesn’t appear to be anything left in downtown Trenton to build on. Are any of the old theaters still around or at least salvagable?

Only the corridor space of the Mayfair remains but it’s difficult to detect as it is floor space in the pharmacy (CVS?) on E. State.

On South Broad, there is the very large Broad Street Theater. It closed in 1960 when the Diocese of Trenton purchased it and converted it into the CYO gymnasium. The marquee is intact and so are the four outside walls. I’ve forgotten how much of the indside remains. It was a 2000-seater with a small balcony. In fact, the fire escape is on the Broad Street side. For a long time, a painted sign “Broad Theater” was visible on the north side of the building. The balcony was tranformed in to meeting rooms.

The church on Clinton Avenue, just a few block from the Broad, was the former Bijou Theater. The Bijou opened in 1905 and closed in the late 50s.

The Park Theater at Washington Street and Hamilton, on the triangle across from Roma Savings Bank, was torn down recently.

I used to visit Frank Copper & his wife at his home, near Washington’s crossing. I think that he lived in Titusville?

Frank showed me how to make “carbon savers” from tin.

Wow, Tin Carbon Savers. That’s a new one for me. I know that theatre owners were cheap but saving a few bucks by making Tin butt savers is incredible. Did he actually use tin or aluminum foil? Tin has a very low melting point and I would question its use but only from a theoretical point of view. Seriously I’d like to know how to construct a Tin Butt Saver. The machined Butt Savers were very good and not that expensive. The thumb screw for locking the butt to the copper plating was quick and easy. I can remember my manager (Jack Kosharek) raising hell about long butts in the sand filled butt discard can. This may be selfish but I’d love to see more postings from ex-projectionists. Perhaps a “projectionist” thread?

Frank Cooper lived near the Ye Olde Washington Inn near the Crossing. He passed away some 10 years ago.

The current site of the Trent is the Roebling State Office Building.

I recently completed writing the biography of my great uncle, Bee Ho Gray. He was a Western performer from Indian Territory. He performed at the Trent Theatre during the week of January 27, 1916.

More information about him can be found at www.beehogray.com

I grew up at the Lincoln and the Trent, as my Dad worked there from about 1962 until they closed in 1972. I also went to HS at Cathedral HS, which was a block away. I remember the entire school was taken to see Bullitt at the Trent or Lincoln (I can’t remember which) when I was a freshman in the spring of 1969.

I’m trying to confirm that Ted Healy (the founder of the Three Stooges), possibly under his birth name of Ernest or Lee, Nash, appeared at the Trent June 12 & 15, 1921. Please email me at Thanks, Frank Reighter