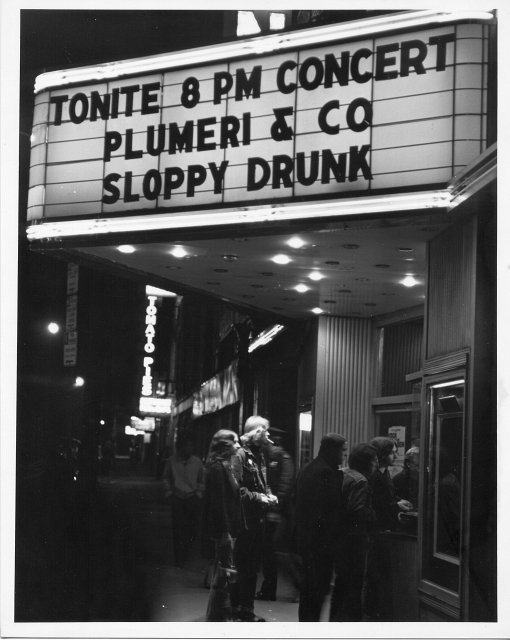 The Gayety Theatre was opened by 1927. Following a remodel it reopened as the Olden Theatre on January 18, 1950 with Stewart Granger in “Blanche Fury” & Richard Greene in “Don’t Take it to Heart”. Part of Associated Theaters of Trenton. Closed for many years, probably since the late-1960’s or early-1970’s.

Regarding the above from Crazy Bob, The “tube sound” he referred to I suspect was the optical sound (exciter) and that was RCA and not “amprex” Both the sound head and the amplifier were RCA. The service contract was with RCA Service Company out of Cherry Hill, NJ. The projectors had an Ampex magnetic head (situated above the picture head). The Ampex magnetic head and amplifier were unused. The speakers were Altec Lansing Voice of the Theatre (3)

Hi stillwagon. I was 19 years of age in 1971. I showed “Patton” at the Greenwood on my birthday in June of ‘71. I will be 56 next week. My memory is a little fuzzy after 35+ years. I remember the E-7’s, & the Amprex penthouses. The operator was a fairly young guy who wore glasses? He did call the machines “cameras”. One of the soft-core films was “Borlelro” or something like that. I think that it was the final Friday night in November, 1971.

Is there a Trenton Times newspaper archive to see what was playing? I’m very sorry if I offended you. The Olden was non-union at that time. That I do know.

No offense taken. It is great to see your postings and to be able to talk with wierdos (like me) with interest in Movie Theatres. It is a pleasure to communicate with someone from the Greenwood — our neighborhood theatre with whom we shared pop-corn bags and no doubt other things as good neighbors will. Still after three or four years in the Olden’s booth, three nights a week and one eleven or twelve hour shift on a weekend day, I can assure you I know the equipment very well and there were no Amprex stereo heads but Ampex connected to the Ampex amplifier (unused) on the wall to the left of projector number 2. Regarding the glasses wearing projectionist who called the projectors “cameras”, I am at a loss. There was a decent guy called Bob who lived up North in New Jersey, and until he retired, my tutor, who was in the Union for fifty-five years. The same union that did not even send him a rose for his funeral. He was a perfectionist and another very kind gentleman (except if you violated any of his very logical rules). He treated the Simplex E-7s like the valuable instruments they were. He was the long-serving projectionist at the infamous Morrisville Drive-in Theatre.

The last movie I ever saw at the old Greenwood Theatre was Moonraker. Does anyone know what the last movie was ever played there was?

I showed the first porn film at the Olden. It was called, “I am Curious Yellow”. They charged (I think) over $5 per ticket and during the first week we sold out all 834 seats three times. The line went around the block twice. The film was awful. It was sooo bad that the fellow that spelled me had placed reel 2 and 3 in reverse order in the rack. I played it that way the following night and didn’t realize it until I went to rewind the third played reel. No-one noticed, and of course I didn’t volunteer. At the time I was working for a defense contractor that had a strict policy, if you were arrested, for any reason other than a traffic violation, you were fired on the spot. At that time in Trenton, both the Theatre Manager and Projectionist could be arrested. I actually had a one inch thick rope tied to the rewind table. The rope had large knots every foot or so. The Candy Girls had a “trouble” button behind the counter. They were going to ring it three times to signal me that we were being raided. My plan was to climb down the rope into the audience. I really needed my day job.

January 18th, 1950 grand opening ad has been posted in the photo section.

When I was a boy in the 1950s, I lived at 107 Garfield Ave, one street over from Olden Ave. From my bedroom window, I would look out directly at the marquee of the Olden Theater. Each week (Fridays, I believe) I would watch the worker change the letters announcing the new movies. My friends and I would attend Saturday serials and cartoons at the Olden and the Greenwood. My first tomato pie was at Maruca’s, and I used to go to the bowling alley upstairs. I remember the boys doing the pin setting. The photo is just like I remember it, with Maruca’s down the street. Great memories. Thanks for this.

I have the ticket grinder from the Olden. It was known as the Gayety (pretty sure of the spelling but pronounced Gay-tee by the locals) until it was refurbished and renamed around 1951. Oh yes, Maruca’s Tomato Pies was a mainstay in the Olden Building and can be seen in the photo above. The photo is Olden Avenue looking south. There was also a bowling alley within the building. The theater retail portion of the building stands but the lobby and auditorium was completely razed in the mid 80s. Russ and Clara’s Bar and the Pine Tavern were close by.

In the early 1970s, they tried running old films such as 1930s Warner Brothers musicals. We were in the lobby of the theater one evening when a fight broke out and one unhappy person threw the large floor ashtray against the wall mirrors and shattered it. You knew things were going downhill at that point. As I was a young boy at the time. I think that was the last time we saw a movie there although we continued to eat pizza at Maruca’s Pizza next door. The neighborhood was changing.