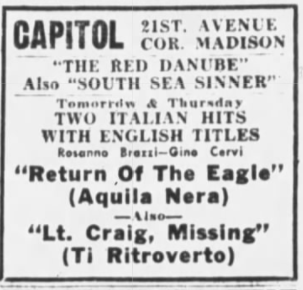 The Capitol Theater was opened on February 1, 1921. It was closed on April 22, 1950 with Evelyn Keyes in “Renegades” & Randolph Scott in “The Desperadoes”. It went into retail use.

The Capitol is now a bridal shop:
http://tinyurl.com/bgd4a2

The theatre was built in 1920 for around $50,000 and opened February 1, 1921. It closed on April 22, 1950 at the end of a 30-year lease with a double-feature of “Renegades” and “Desperadoes.” The theatre’s space in the Capitol Building was repurposed for other retail operations.

February 1, 1921 ad posted. Could have been opened before, but no ads were found in the News.