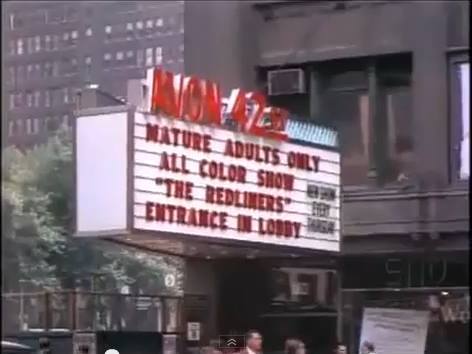 Operated by the Avon chain, who ran numerous (mostly storefront) theaters in and around Times Square.

“Behind the Green Door” made Marilyn Chambers a star. Here is that film paired with “The Resurrection of Eve” on a showcase run.
View link

A C/O for the Avon 42 seems to have been issued in mid-1971 with a maximum capacity of 222 persons all on the ground floor with projection booth at mezzanine level and toilets and lounge in the basement. A previous C/O indicates the theater was carved from the offices of a “loan brokers establishment” that had occupied from at least 1940. By 1981, a new C/O shows the place converted to a restaurant with offices above.

While the C/O capacity of 222 does not necessarily refer to number of seats, I think that’s a pretty fair estimate to enter at the top of this page.

Yes… I meant to come back here and post that. This building and all the adjacent parcels along 42nd Street and 43rd Street east to Sixth Avenue have been gobbled up for the enormous Bank of America tower that is now being constructed. These lots included the Henry Miller around the corner on 43rd, of which only the facade remains – heavily shored and awaiting re-use as the facade to a NEW theater to be included as part of the B of A project.

So, status should be changed to “closed/demolished” and seats can be entered as “222”.

City pressure on landlords to double the rent forced the closing of the Avon 42 (live sex shows) and the Avon-At-The-Hudson (X films at the Hudson)to close down in 1975.

The Hudson X movies just moved over to the Henry Miller for several more years.

Found this image of the Avon 42 at grindhousedatabase.com. Looks like it was stage shows only at this point. This is an image of the block from bridgeandtunnelclub.com that was taken in 2004 just before all these shops closed for demolition to begin. The Avon 42 was located in the building behind the sign that has the 133 W. 42nd address on it, it has a very shallow yellow awning at the roof line.

Also found this small photo on the grindhouse database site that seems to show the Avon 42 setting up shop at a different location – and showing films again. Marquee looks the same, but the building looks to be entirely different.

rivest266, that ad is for the Avon on Love which I believe was the New Cinema Playhouse with a different entrance, and not this theatre.