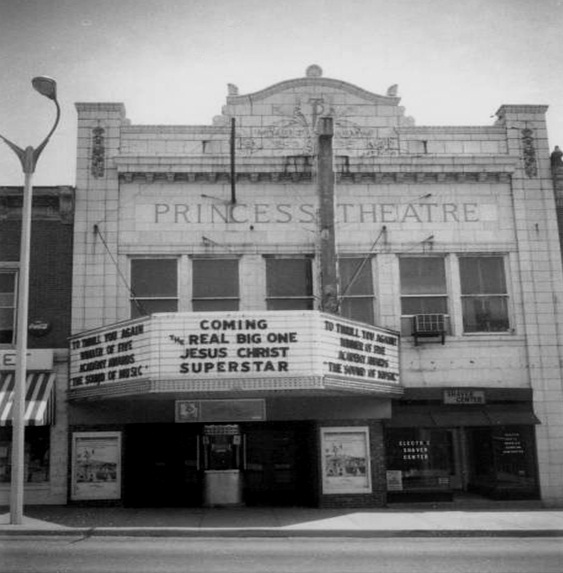 The Princess Theatre was built in 1913. It was equipped with an Estay theatre pipe organ. It was added to the National Register of Historic Places in 1983 as Building number 83000112. The architect is listed as John L. Nichols. The building was used as a restaurant, but closed around 2018 when the building was damaged by a fire.

Does anyone know if the Estey theater organ that was installed in the Princess Theater in Bloomington, IN, is still there?

It looks like there is (or was) a Mexican restaurant in the lobby:
http://tinyurl.com/hg33v

The restaurant in this old theater is not called the Princess restaurant as the caption states. It is called El Norteno.

Bloomingpedia says that John Harris built the Princess Theatre in 1913. It was designed by the firm of Nichols & Nichols. John L. Nichols had previously been in a partnership with his son, Bridge Nichols, who died in 1911. He returned to solo practice in 1914 after his brother, Leo Morton Nichols, left the firm after little more than a year.

In 1923, the Princess was remodeled, again with plans by John Nichols, and an addition doubled the size of the auditorium. The theater closed in 1981. In 1985, the addition to the auditorium collapsed. The building was restored in 1986 and has since served as a restaurant.

Esteyman, if my memory serves me correctly, Dennis James removed the organ from the Princess in 1968-69 and installed it in a television studio on IU’s campus where he showed it to me. We were in the Marching 100 at the time.

Found this site that contains the following :“June 8, 1985 – Princess Theatre – 6th and Walnut – No fire, unexpected building collapse. Building was fortunately empty at time of collapse”

Found this on the Stanford Theatre wed site: Dennis James received his education as an organ performance major at Indiana University (BMus), (MMus), and continued with post graduate studies at Ohio State University and at Arizona State University. While he was in college, Dennis helped restore an Estey pipe organ once played by Hoagy Carmichael that was formerly in the Princess Theatre in Bloomington, Indiana, and he played that organ for campus silent film screenings.

The Princess Theater transformed into an upscale bar and restaurant called Alchemy. But, it’s now closed because of a fire that caused extensive damage. It’s unclear if the restaurant will reopen. link