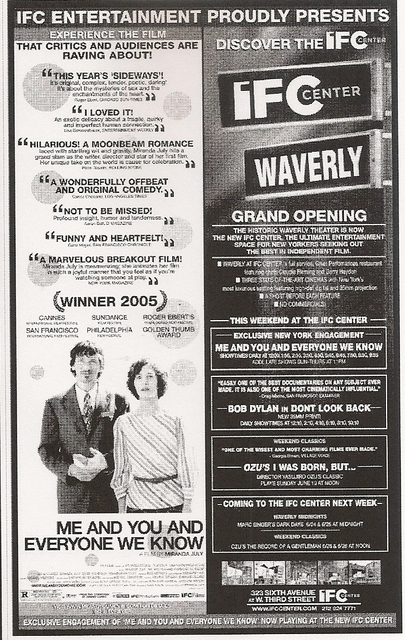 Once a single screen theatre which opened by 1938, the 550-seat Waverly Theatre was twinned on October 30, 1981, with the closing and and conversion of the balcony into a second, smaller auditorium. Renamed Waverly 1 & 2, it was a funky little two-screen house which was the launching pad of “The Rocky Horror Picture Show” as a midnight cult hit in New Yew York.

Before it closed in late-2001, the Waverly Twin featured mostly films that double-run from the glossy and much more charmless United Artists Union Square Stadium 14 at Broadway and W. 13th Street. The Waverly Twin was also known for showing the occasional low-budget indie or art flick, and hold-overs whose runs had expired at other Greenwich Village theatres.

On June 17, 2005 it reopened as the three-screen IFC Center screening independent, foreign, documentary, and classic films. On December 4, 2009, two additional screens in a former café area were opened, for a total of five screens.

What new Landmark megaplex? are you referring to the 8 screener they announced? A megaplex meant many more screens.

This whole business of reserved seats and recliners is outrageous and pricey.

My favorite theater for “midnight shows.” Remember seeing BRIDE OF RE-ANIMATOR and FRANKENHOOKER in particular.

What does IFC stand for?

PLEASE update, the two additional screens next to the main theatre. When it open 2005, it was a cafe IFC converted to make the two added theatres. Grand Opening ad posted.