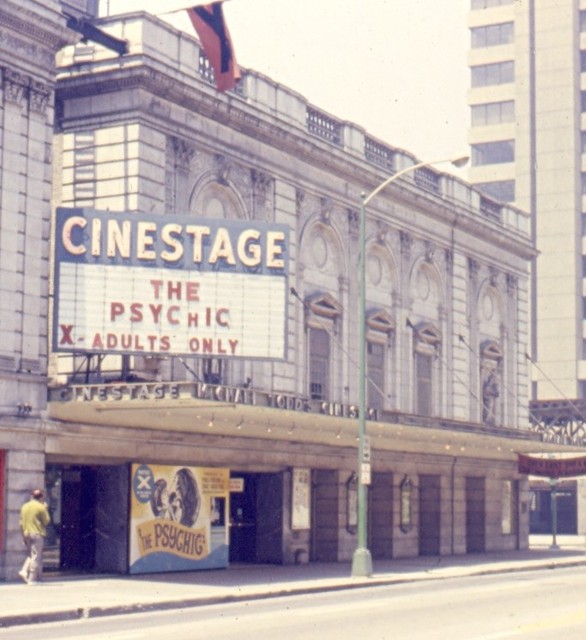 The Selwyn Theatre was designed in 1922 by C. Howard Crane (who also designed the adjacent Harris Theatre) for theatrical producers Sam Harris and Edgar Selwyn. It was done in English Georgian style, whereas Crane designed the Harris in Italian Renaissance style. Among those to appear on stage at the Selwyn and Harris Theatres included Ethel Barrymore, Charles Laughton, Helen Hayes, and Mae West.

Mike Todd, of Todd-AO sound system fame, purchased the former Selwyn Theatre, after it closed as a legitimate playhouse, and converted it into the first permanent Todd-AO showplace in Chicago, opening on April 4, 1957 as Todd’s Cinestage with “Around the World in 80 Days”. (Todd also acquired the Harris Theatre, which was renamed for Todd himself). In fact, the entire stage was removed for the transformation to Todd-AO.

The theatre was also known unofficially as owner Mike Todd’s laboratory, where he experimented with many different aspects of Todd-AO. The theatre also used the legendary Smell-O-Vision process and the Smell-O-Vision machine was still in the basement when the building was demolished.

After the road show days, Great States Theatres(later Plitt Theatres) ran the Cinestage as an adult theatre and a flat screen was installed in front of the original Todd-AO strip screen for this purpose. Pornographic films were shown at the Cinestage from August 28, 1970, beginning with “Trader Horne-” and it was an adult cinema for about 10 years.

Following this, M & R Theatres tried unsuccessfully to revive the Cinestage and it was renamed Dearborn Cinemas from December 20, 1985, but this attempt was short-lived and the buildings were ultimately abandoned. Interestingly, the building was owned by Todd’s widow, Liz Taylor at the time. The city finally bought it from the actress, with plans to build a performing arts center on the same location.

Just before its demise, Cinema Treasures contributor Mark Gulbrandsen snuck into the theatre and he reports it was in pretty poor shape overall. The strip screen was still in place, as was the flat screen that was installed to cover it. The projection booth was empty and only slight remnants of the Norelco projectors were to be found.

Khnemu is correct. See the photo I posted on 08/25/15. Only the facade of the old Cinestage remains, with a new theater built behind it.

Here is a THSA photo of the Selwyn’s terrible projection booth. More photos available there through search.

Blurry Cinestage in the background.
October 1966.

New Showcase Presentations in Chicago article includes mention of the numerous 70mm (and roadshow) engagements here at the Cinestage (along with other Chicagoland cinemas).

1987 photo added, as the Dearborn part of M&R Dearborn Cinemas, via The Man On Five website. 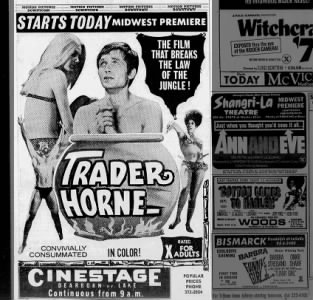 To celebrate the occasion, I’m sharing the link to a new retrospective article on the film. This and many other cinemas get a mention in the piece.