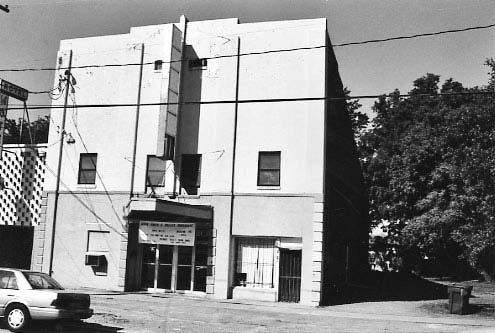 The Carver Theater, located in Columbia, SC, was one of two theaters that catered exclusively to the African American community.

It was located alongside the Waverly community, which was the pre-eminent African American community in Columbia. Many important community members lived there, including doctors, lawyers, educators, ministers and skilled tradesmen. It was also located in good proximity to historically African American Benedict College and Allen College.

In addition to showing movies, the theater also featured weekly talent shows for area youth that were based on the famous “Amateur Hour” in Harlem.

The building was listed in the National Register of Historic Places on July 17, 2003.

Additional exterior and interior photos can be seen below. The Agape Church renovated the theater around 1998 and used it for a few years, but has since moved on. The building’s current occupant, if any, is unknown:
http://tinyurl.com/22k5gu

The Carver Theatre located at 1519 Hardin St. in Columbis,Sc. was remolded in the summer of 1966. I got my license and in the fall it opened. After I got out of service Mr.Z asked if I wanted to come here and help with the remolding of the theatre. It had the same type equipment as the Ritz in Memphis. It had a balcony the floors were carpeted the restrooms were upstairs either side of the balcony. The projection room about 12'x 20'. Two windows 18"x24"high off the floor. the ac in the pictures were installed sometime later. The other projectionist name was Mr. Watson The manager name was A.E.Smith. The ticket booth was on the corner of the building with the consecession stand was right behind it. The office was upstaris behind the balcony. The glass window next door was a barber shop operated by a man with a bad led, called Little Joe .

The Carver Theatre is one of only two classic theatres left in Columbia. The Fox being the other which is being restored and will become the Nickelodeon in the fall of this year. The Carver has not had much attention, hopefully that will change. Recently a historic building was demolished in the Waverly area and that has brought other historic buildings under the microscope, which is a good thing.