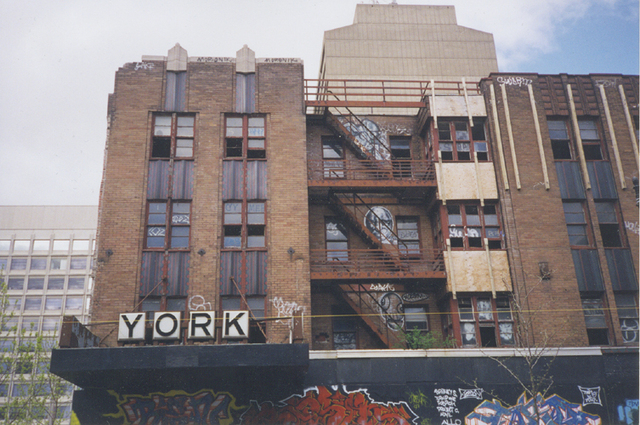 The York Theatre was opened by United Theatre on 18th November 1938. The opening films were “Algiers” starring Charles Boyer and Don Ameche in “Gateway”.

The York Theatre was closed in 1989, and stood unused until it was demolished in 2002.

Thanks for all the photos.

Love to have that “Octopussy” Banner.Great shot.

I seen Octopussy there.

70mm at that on “Octopussy” never think of the Bond films in 70mm.

Is the York Theatre considered a “picture palace”? or simply an “art deco theatre” or “streamline moderne”?

On August 23, 1982 a friend and I, in town for the World Film Festival, took a break from it and came here to see “Pink Floyd -The Wall.” Among other things, we were overwhelmed by the quality of the sound in the theatre!

Also saw Pink Floyd -The Wall at the same theatre.

Circa 1956 photo added via Swanand Natu.