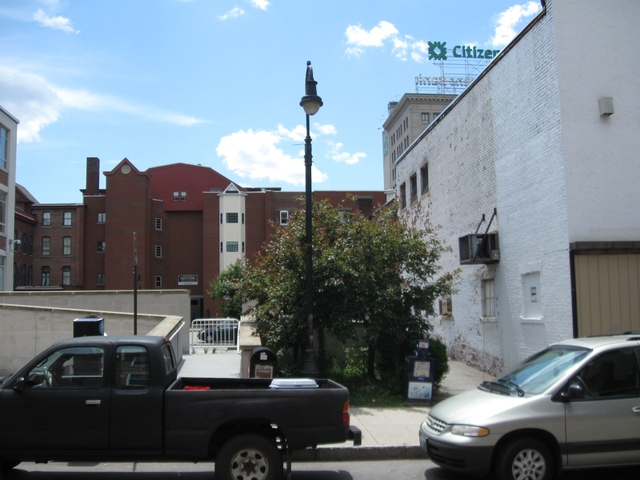 Opened May 30, 1940, the former Rex Theatre was renamed King Cinema and finally The Movies. After closing in the mid-1980’s, it became a nightclub named Club Liquid. The theatre is currently owned by Star Theaters out of Massachusetts. It was converted into a nightclub by the current lease holders. They piled all the seats in the back of the theatre… which caught on fire. The nightclub reopened as Realm and proved popular with the 18-24 crowd. It had closed in 2014 and the building was ‘For Sale’. It reopened in early-2020 as a live performance venue named Rex Theatre again.

The entry for Manchester architect Norris W. Corey in the 1956 edition of the AIA’s American Architects Directory lists the Rex Theatre as one of his projects.

As can be seen from the photographs I took in July 2012, the nightclub was by then called ‘Realm’.

After the Rex, this theater was called the King.

Later, it became The Movies, and at some point was tripled. A new cross wall was built where the floor seating started in the original auditorium, and the front half of the house was split, with seats facing uphill to screens on the new wall.

In the mid-1980s, The Movies played a mix of films, including some offbeat first runs (Re-Animator), and revivals (1962 Manchurian Candidate). This was also the local venue for a weekly midnight Rocky Horror Picture Show.

The nightclub is closed and the building is currently vacant.

Other sources indicate that at some point (probably 1962 or later), Descoteaux sold the house to the Shea circuit. Shea remodeled the Rex and renamed it the King Cinema. By 1980, it had been renamed again, to The Movies. As formermovieguy’s earlier comment notes that The Movies was still operating in the mid-1980s, that should probably be the way we list it, with Rex Theatre and King Cinema as aka’s.

When the M-G-M agent came to Manchester in the spring of 1941 to survey the movie theaters, he listed the Rex as a competing theater to the others, but, for some reason, he never filled out a report for it. Two other Manchester theaters which he left out of the survey were the Globe and the Modern.

The current Google street view shows only one sign on the building, that being a “For Sale” sign posted by Stebbins Commercial Properties.

This web page indicates that the building has been bought by the Manchester Development Corporation, on behalf of the city, and it was to have been renovated as a home for the Old Sol Music Hall, with its opening planned for 2018. However, the latest news on the Old Sol web site says that the deal has fallen through.

I can’t find anything more recent telling of what is to become of the Rex’s building, but presumably the city still owns it and it is currently not in use.

The City of Manchester announced they have partnered with the Palace Theater to renovate the historic Rex Theater.

MANCHESTER — City aldermen voted Tuesday night to approve a partnership between the Manchester Development Corporation and The Palace Theatre to renovate and operate the Rex Theatre as a performance venue.

Under the agreement, the Manchester Development Corporation (MDC) will loan the Palace Theatre $1.7 million to renovate the building into a 300-seat multi-use theater and function space.

Under the terms of the agreement, the Palace Theatre would repay that loan over 10 years, plus 2 percent interest annually.

Palace Theatre officials also proposed a yearly $7,500 payment in lieu of taxes, but board members — on a motion by Alderman-at-Large Joe Kelly Levasseur — voted 11-3 to approve the plan without requiring the annual payment. Palace Theatre officials hope to have the renovations of the circa 1920 building completed by Oct. 19, 2019.

“Our goal is to turn this building into something that brings people downtown, something more than more office space or a bar,” said Will Craig, chairman of the Manchester Development Corporation.

“I’m very proud to be here,” said Peter Ramsey, president and CEO of the Palace Theatre. “About six months ago the mayor approached me and said, ‘We have this Rex Theater, is there a partnership we could develop here?’ There is value in the Rex.”

“I want to share just what great news we think this is,” said Mike Skelton, president and CEO of the Greater Manchester Chamber of Commerce. “We think this has ballpark/civic arena potential in terms of impact on the city. Based on the research we’ve done, this is exactly the type of amenity young people want to have in the community.”

“It’s time for that thing to grow, it’s time to make something happen,” said Levasseur.

In 2001, Manchester officials temporarily closed a club there because of crowding they deemed life-threatening, and for other safety code violations. A fire that same year also temporarily shuttered the club, which came under scrutiny because of patrons getting arrested after leaving. The club finally closed permanently several years later.

A purchase and sale agreement for the property between the MDC and The Rex LLC — a partnership between philanthropist Liz Hitchcock and Gray Chynoweth, chief membership officer for the Advanced Regenerative Manufacturing Institute — fell apart earlier this year when the pair pulled out of negotiations with the city, saying their plan to use the site as a performance venue was no longer “economically viable.”

That marked the second time in less than a year a potential buyer walked away from a proposal for the property. In March 2017, Matt Wilhelm, executive director of Old Sol Music Hall, Inc. — who proposed a live music venue for the site — said after months of negotiations, Old Sol Productions and the MDC were unable to agree to terms for a purchase and sale agreement.

In 2001, Manchester officials temporarily closed the club because of crowding they deemed life-threatening and for other safety code violations. A fire that same year also temporarily shuttered the club, which also came under scrutiny for patrons getting arrested after leaving. The club finally closed permanently several years later.

Following an affirmative vote by the Board of Mayor and Aldermen (BMA) on July 7, 2015, MDC entered into an agreement to purchase the property. As previously reported by the New Hampshire Union Leader, the MDC bought the property from club owner Timothy Gage.

The city paid $412,500 — using development corporation funds, not city funds — for the property, located one block away from the busy Elm Street corridor and next to the Circuit Court building, once home to the Union Leader.

This venue has reopened as the Rex, operated by the same group that operates the Palace. It is focused on live events and I do not know whether it is equipped for film at this time.