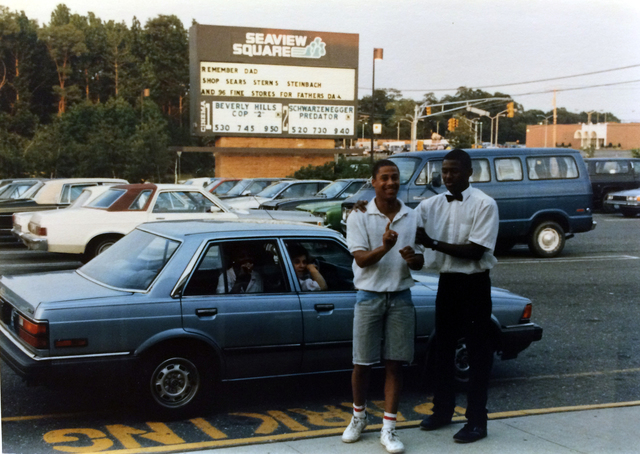 The Circle Theatre was opened by Walter Reade Theatres on December 23, 1970. It was located in the Seaview Square Mall. On June 17, 1977 it was taken over by General Cinema and renamed Seaview Square Cinema. This theater closed on March 14 1996 with Bruce Willis in “12 Monkeys” & Peter Weller in “Screamers”. It has been demolished.

This theatre was built in 1970 and opened with TORA! TORA! TORA! It was a Walter Reade Theatre and the interior design was by Mrs. Walter Reade, Jr. The name of the theatre was The Circle. After the demise of Walter Reade, Jr. in February 1973, the theatre went to the Edwin Gage firm and run under Seascost Theatres until it went to Music Makers Theatre and was split down the middle in the early 1980s. The opening was in December 1970 with standard 35mm optical monophonic sound. The Mayfair and St. James demise came in December 1974. The name change came when the former Seaview Square Mall was opened. GIL CARNEY drop me a line so we can go over old times with Balmer, Floresheimer, Gunberg, Tom Budd, George Clark, Charlie Chappell, Sam Colissimo et al. Glad to see an old familiar name from the WRO (Walter Reade Organization). Email is

This theatre was never a music makers theatre, thank god. It came under the General Cinema banner in june of 1977, the same time another former Walter Reade house, the Woodbridge was taken over by GCC. In the fall of 1977, both Seaview and Woodbridge were split in half. I know this because I worked at Woodbridge, and the constuction crew would tell us how Seaview was about a week behind Woodbridge. What they did in one theatre this week, the crew went to the other theatre the following week. First the wall studs, then the sheetrockers, and finally put the seats back in. Then we came in to do the screens, projection room, apertures, etc.

I saw “Return of the Jedi” and “E.T.” here around 25 years ago. It should not be listed as an Asbury Park Theatre though. Seaview Square is in Ocean Township, on the west side of Route 35.

I started going here after the Neptune City Theater became too sketchy, around 1985. My friends mom took us to see Star Wars here. In ‘86, my first solo trip to the movies was here to see 'The Color Purple". It was my first 'cineplex’ experience. All the new movies played at Seaview Square and was within walking distance from the mall. The big differences were the film quality and ticket price, compared to Neptune City. Oh, and also one’s personal safety.

i worked at Seaview Square from 1986 to 1988. It was a GCC theater as someone else mentioned. When i started we had “club paradise” and “running scared”. Fun times. Sad to see it go. I have some super8 film i shot of the place not long before they demo’d it.

This was one of my favorite theaters. It had a giant screen and very comfortable seats. In the lobby there was a framed poster of the 1970 movie “Tora Tora Tora” which I was told was the first feature shown in the theater. The Circle Theater reopened as a twin in June of 1978. I went there to see “Grease” which was being shown on both screens with staggered starting times. I hated what they had done to this once great movie house.

If anyone has any pictures of the theatre exterior, please post them! Thanks!!!

Grand opening as the Walter Reade Circle Theatre on December 23, 1970. It was architected by David Marner of Asbury Park. Mrs. Walter Reade Jr. did the interior design and the first film was a benefit screening of “Tora! Tora! Tora!” General Cinema Corp. took on the theater June 17, 1977 changing it to the Seaview Square Cinema to match the mall that was opened.