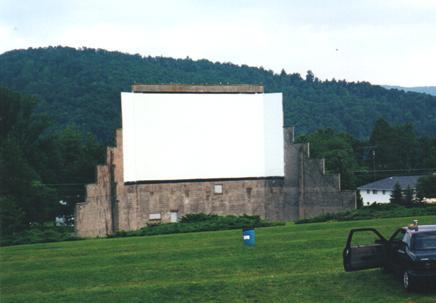 Warner’s Drive-In opened in April 1952. This single screen drive-in has a capacity for 250 cars. It was closed in 2014 due to a lack of money to purchase a digital projector. A fundraising effort raised the money to purchase a digital projector and it reopened September 9, 2016 with “Finding Dory”. It is located north of Franklin on Lee Drive (US 220). Warner’s Drive-In shows single features on the weekends only.

This page has a bunch of nice photos of it:
http://www.driveins.org/wv-franklin-warners.htm

The first appearance of the Warner in the Motion Picture Almanac was the 1953-54 edition. It eventually listed the owner as Harold Warner, capacity 200. By the 1966 edition, it was the Warner Circ.

There’s a very nice story about Warner’s at the West Virginia Historic Theatre Trail web site. Charlie Warner and his son Harold opened the Warner’s Drive-In in April of 1952. More than 50 years later, it was somehow the property of the Franklin Oil Company, which didn’t want to spend the cash to convert it to digital projection, and it closed in 2014.

A group of locals formed a non-profit to refurbish the concession stand, buy a new projector, and reopen Warner’s. It finished its first full season on the new equipment in 2017.