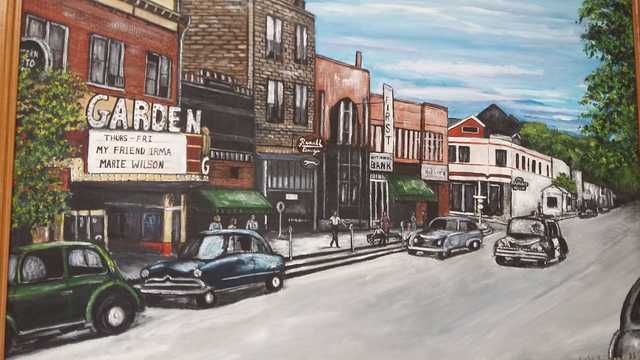 Here is a 1979 photo when the Garden was an auto parts store. Style looks to be art deco.
http://tinyurl.com/cr6zv7

Address is 125 S. Main Cross Street. Renovated and reopened as a live performance venue. Full chronological history in below link. Additional photo in second link. Mountain Movers Theatre Company is based there as well. Their website is below too.

“Ninety-eight years ago, in July of 1921, Dr. C.B. Walters broke ground on a new, state-of-the art building in downtown Louisa with a steam shovel. The upstairs was to be used as offices for Dr. Walters. The downstairs was divided into two rooms. The first was used as a modern pharmacy. The second was leased for use as a picture show.

The twenties were the age of silent movies. Miss Spencer would play during the movies, coordinating her music with the action that was taking part on the screen. On August 5, 1926, talking movies were introduced to The Garden Theater. A new sound system was installed in 1929.

Modernization began again in 1938. A new wide screen was installed along with a new stereo sound system, air conditioning, and a new projector. This is also when the grand marquee and front was built.

The theater continued to be a hub of entertainment for Louisa until the late 70s. It’s hard to go anywhere in Louisa without finding someone with great memories of the Garden Theater. In a post on Facebook, many commented with memories of seeing their first movie in the theater, spending weekends there, and the low cost of popcorn.

In celebration of the past of the building, the new owners, Tim and Lelia Robinson, have begun construction to restore the theater to its former glory. Mountain Movers Theatre Company is hosting two sets of summer camps for the children of our community. Each camp will end with public performances. For more information on camp registration, Mountain Movers Theatre Company, public performances, and ticket sales, visit www.mtnmoverstheatre.com"