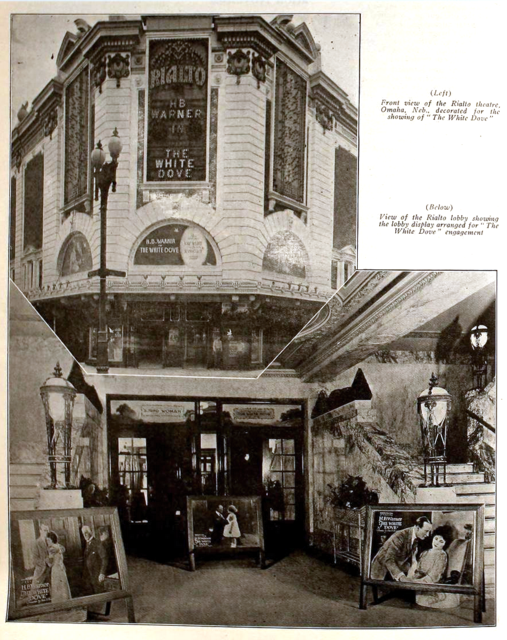 The Rialto Theatre opened May 29, 1918 with John Barrymore in “Raffles”. It originally featured a diagonal floor plan and seating arrangements, and a multi-colored, terra-cotta exterior.

For promotional use, the theatre has three large vertical billboard-type signs, one on the cut-off front corner of the building, and another on each side of the theatre’s center board. The Rialto Theatre was still open in 1929, but had closed by 1931.

After the Rialto Theatre closed, the building was used for many different retail store purposes. It was later demolished.

Is this building at 14th and Douglas St.? Does anyone know where I could find a photo of the Douglas St side of the building? There used to be a diner there;and I am looking for a photo of the outside of it.

The Rialto Theater sat on the northeast corner of 15th and Douglas, where the Union Pacific office building is now being constructed.

If you want to find pictures of this building, from either side, the place to go is to the archival photography department at the Durham Western Heritage Museum in Omaha. They have over 21,000 pictures of Old Omaha, including the Rialto Theater. I know, because I have seen them.

A vintage view of the Rialto theater can be found at http://www.historicomaha.com/cp4.jpg

Several architectural elements from the Rialto Theatre, as seen in the photo from beardbear31 on 30 Sep 2004, can be found at Lanoha’s Nursery in Omaha.

There is a photo depicting part of the lobby of either the Rialto Theatre or the Orpheum Theatre in Omaha, published in 1926 in a trade journal for the marble industry called Through the Ages. The magazine used the same photo twice, one caption identifying it as the Rialto and the other as the Orpheum. This is the photo, as scanned and displayed by the web site Quarries and Beyond, which has copyrighted the scan (so don’t upload it to the photos section here.)

I think the photo probably depicts the Rialto, though. The lighting fixtures have an Art Nouveau look, which doesn’t match the French Renaissance style of the Orpheum (1926) but might well have been used in the older Rialto (1918.)

I am very interested in the history of the Rialto in Omaha. Does anyone have historic items, programs, or photographs of it that you might be interested in selling?

1961 photo of the former Rialto as Tully’s added, courtesy of Steve Raglin. There is a second photo of Cooper’s Cinerama next door as well. Maybe some one with photo editing skills can combine the two.

The Rhapsodic commentary on the opening of the Rialto that appeared in the June 22, 1918, issue of Motography is worth quoting in full:

“A. H. Blank and Associates Give Pictures a
Home That Has Few Equals in the Country

“THE Rialto Theatre of Omaha, Nebraska, built at a cost of $750,000, was recently opened to the public.

“It is one of the most beautiful playhouses devoted to pictures in America. The exterior was designed by John Latenser, Jr., and the interior by Frank Latenser, two Omaha architects. The structure is a composite of Venetian renaissance with modern adaptations. The building is 132x132 in dimensions. The dominant tones of the exterior trimming are of old ivory and blue terra cotta, with panels of tapestry brick in soft tones.

“The interior gives the spectator the effect of overlooking an Italian formal garden. Mural paintings form a per-> spective in which Lombardy poplars and ornamental shrubs lead the eye away to far-off mountains. There are marble balustrades and balconies with alcoves containing cleverly lighted fountains.

“The house is flooded with light from concealed electric globes and many beautiful color effects are gained.

“The seating arrangement is in keeping with the perfection of the house. The seats in the pit are so located that a perfect view of the screen is given from any part of the floor. There are no columns or pillars to obstruct the view.

“The draperies of the curtain and screen are of old rose silk velour, and all of the carpets are of soft-toned gray. Usherettes are costumed in gray, in keeping with the color scheme.

“The ventilation and heating system is the best obtainable. The washed air system is used and the air is entirely changed in the theatre ten times in an hour.

“One of the largest organs in the world has been installed. A prominent musician, Kenneth Widenor, is the organist. The orchestra is under the direction of Harry Silverman.

“The Rialto is essentially an Omaha institution, owned by Charles Grotte, Walter Brandes, John Latenser, Sr., and A. H. Blank.

“The opening play was John Barrymore in ‘Raffles.’ Paramount and Fox standard pictures are shown.”Of interest are the revelations that the interior was designed by Frank J. Latenser in “…a composite of Venetian renaissance with modern adaptations.” The “modern adaptations” must have referred to such things as the art nouveau lighting fixtures I noted in an earlier comment.

The firm of John Latenser & Sons was formed in 1914 when John L. Latenser, who had practiced architecture in Omaha since 1885, established a partnership with his sons, who thereupon took over most of the work. On the Rialto project, John Jr. designed the exterior and acted as structural engineer and supervising architect. The Rialto was the first of five theater projects designed by the firm, including a 1954 remodeling of the Orpheum.