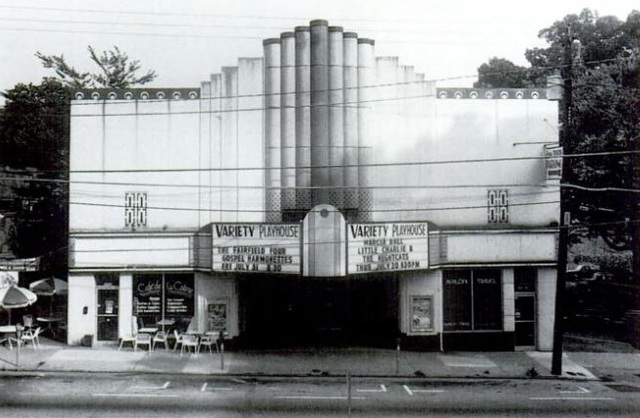 An icon of Atlanta’s little five points district, this opened on October 2, 1940 as the Euclid Theatre (you can still see this name painted on the east side of the building). It was built by the Lucas & Jenkins Theatres. L&J also operated the Fox Theatre. The Euclid Theatre was operated by the Storey Theatre Inc. chain in 1957. It the Variety Theatre sometime during the late-1950’s. It was closed on July 31, 1962.

Until the late-1980’s the theatre stood vacant until George Ellis acquired the lease and relocated his Film Forum from Ashley Mall to the site. The theatre wasn’t able to compete with the multiplexes that were now booking art films that were previously the priority of the Film Forum. The theatre is currently part of the group that manages the Roxy and the Temple concert halls. By 1998, it was renamed Variety Playhouse.

I have seen many rock concerts at the Variety Playhouse over the years, especially Patti Smith, one of my all time favorites. At her show in July, 2000, on her “Gung Ho Tour”, I spotted a guy standing near me at the foot of the stage. I told my brother, who was with me, that the guy looked like Michael Stipe from R.E.M. My brother didn’t believe me until Patti invited the guy on stage to sing a duet with her. THEN, my brother believed me!

The marquee appears in the background of a shot in the 1989 film Driving Miss Daisy!

I could not find the Euclid Theater listed in Cinema Treasures, so I attempted to add it.
Looks like things got a little jumbled in the header – the Euclid was a film house from Oct 4, 1940
when it opened until July 31, 1962 when it closed. Only much later did it become the Variety
Playhouse.
I went to Bass High School in Little 5 Points from ‘61 to '65, when I finally made it into the 9th
grade… ok, just a little five points humor there, I actually graduated in '65. During the time I was
at Bass the Euclid was rented out for a while to an evangelist preacher named David Epley (still active and begging for $$$ today). Otherwise it was closed. Wikipedia contains an excellent history of the
Euclid, just enter Euclid Theater Atlanta or Variety Playhouse. I have never been into the Variety
but I believe it is a stage, not a motion picture, theater. Later when time permits, I’ll have to post
a little more about the Euclid, for what it’s worth.

Tim Farley: guess I should have read the posts a little more carefully.
Do you wrote the Wiki about the Euclid (Variety)?
Great job, very well researched and informative. Appreciate that. Thanks very much.

Well, this is getting comical.
SO you wrote the Wiki……

Pardon me for four posts in a row, but I have just a little more to say about the Euclid Theater.
I lived on Euclid Ave and then Albemarle Ave in the 50s. I first started going to kiddie matinees at the Emory in 1956 or ‘57. Those shows were mostly older cowboy features, from the early or mid 40s. There was always a line at the box office on Saturday mornings – where
else could parents get a 4-5 hour babysitter for less than fifty cents? Admission, as I remember, was
fifteen cents. I always had to carefully plan how I would spend the 15-20 cents my old man would
lavish on me for treats (actually my lunch). I usually opted for the Snow Cone, available in grape and
my favorite, cherry. The cone would be supplemented by a couple of five cent candies, Milk Duds
were high on my list of favorites. Of the three neighborhood theaters in the area, Euclid, Hilan and
Plaza, I believe the Euclid was the only one to sell Snow Cones.
By 1957, the Euclid, open less than 20 years, was beginning to get a little frayed around the edges.
The carpets on either side of the center seats was a gelatinous mass of sludge, years of ground in
soda and candy. I still remember the sticky adhesive sound my Buster Browns would make as I
walked on the floor between the seats. It was possible to step out of a loafer on those floors.
My older cousin, a tenth grader at Bass High, on the hill directly across the street from the
Euclid, worked the box office for a while. He took great delight in busting kids over 12 who tried to
get into the theater for the kiddie admission price. He later became a banker — that figures.
Quite a few of the Euclid seats were ripped and repaired with duct tape. My cousin told me that there
were a couple of guys they were watching, suspects in the seat slashing wave of '58. They were
eventually caught, and banned from the theater. The Euclid was the only neighborhood theater I
ever heard of that had a “banned list.” Parts of Little Five Points were pretty tough.
The Euclid also had “love seats” – a few seats on the outer aisle built for two people. I don’t recall
seeing love seats at other theaters, although they might have been common, I can just remember
them at the Euclid.
In 1959 we moved to Siberia, aka Decatur, so it was so long Euclid. By the time I got back to
L5P, the Euclid was history. By the time I graduated from Bass in 1965, Little Five was in decline,
getting downright sleazy. Glad to see that the area has bounced back, and that the Euclid continues
life, albeit in another incarnation.

We have attended many music shows over the years at the Variety. It’s a great venue for music. Only problem is that the restrooms- over the original vintage- are upstairs and hard for us old people to get to. The building has all its structural integrity, but no adornments.

Just added a screen shot from “Driving Miss Daisy”. The Variety Playhouse in the background. The 7 Stages Theatre is mocked up as the Rialto.

It used the name “Variety Playhouse” as long ago as 1998, when I lived almost across the street.