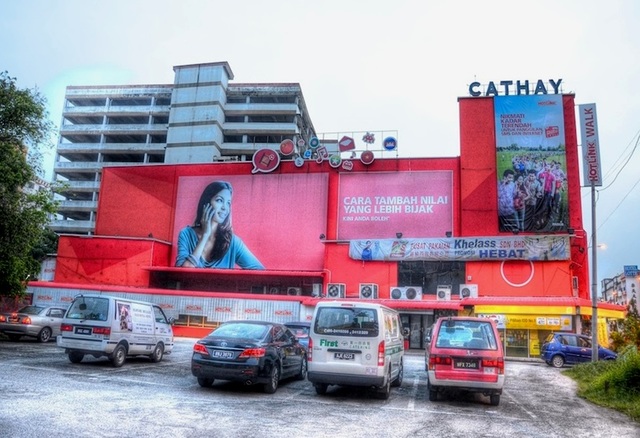 This beautiful single-screen theater was built in late-1956 and opened on August 31, 1957, with the movie “King and I”, an Asian-themed film.

In addition to the theatre’s front lobby, the Cathay Theatre has a nice side lobby. Seating capacity in the downstairs portion of theatre is 798 seats, while above, the balcony seats 376 patrons. The theatre also has a DTS sound system. The theatre still uses two 35mm projectors for changeover of reels and has refrained from using platters for film projection, despite the fact that platter equipment is installed. Another unique aspect of this theatre is its marquee, which is very different from that of most American-style theatres.

Today, the Cathay Theatre plays first run movies. While it formerly played only English language films until the 1990’s, it currently shows films in Malay, Hindi, Tamil, and Chinese; representing the most commonly used languages in Malaysia.

Currently, a group is trying to find a sponsor to help buy the theatre to prevent it from being potentially demolished.