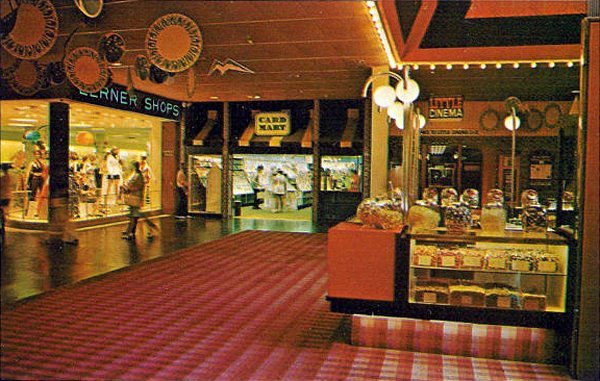 The Little Cinema opened July 10, 1970 with Kenneth Nelson in “The Boys in the Band”.

I think this house was where the food court currently stands and closed around the time Loews Wayne opened.

originally built inside the mall as a four screen house, the Little Cinemas never were profitable.Two of the screens were converted for retail after about a year of operation in the late ‘70s and the remaining two screens met the same fate the following year.

The June 15, 1970, issue of Boxoffice reported that Spyros Lenas would soon open a 250-seat automated theater on the site of a former restaurant behind his Willowbrook Cinema. This became the house that was called the Little Cinema. Later Boxoffice reports gave the seating capacity of the first Little Cinema as 300.

Boxoffice of June 12, 1972, has an item saying: “DeVisser Theatres announced the grand opening of Little Cinema II, its third theatre in Willowbrook Shopping Center in Wayne, N.J.. All three theatres, including the Willowbrook Cinema and Little Cinema I are owned and operated by Spyros Lenas.”

Boxoffice of December 13, 1976, says this: “Lenas' Willowbrook Cinema in Wayne, which is adjoined by Little Cinema 1 and 2 is advertising that a fourth unit soon will be constructed alongside the existing three. The multiples are all located on the main mall inside the Willowbrook Shopping Center.”

But instead of building a fourth auditorium, the original Willowbrook Cinema was split. Boxoffice of December 19, 1977, said that Lenas' Willowbrook Cinema had reopened as a twin, with approximately 560 seats on each side. They were designated as Cinemas 3 and 4, with the two Little Cinema auditoriums designated as Cinemas 1 and 2. This item said that the originaal Willowbrook had seated about 1200 as a single-screen house, though Boxoffice items at the time of its construction had said that it seated 1,500.

Here is an article about Spyros Lenas (right-hand page) in Boxoffice of August 31, 1972. Lenas was also the operator of the Anthony Wayne Drive-In, adjacent to the Willowbrook center. The Loews six-plex built in 1982 might have been erected on the site of the drive-in, but I’ve been unable to confirm this.

The Willowbrook Shopping Center was designed by the Los Angeles architectural firm Welton Becket and Associates, architects of the Cinerama Dome in Hollywood.

As i seem to recall, this theatre in its early days ran adult movies.

Joe Vogel has it mostly right, except the original Willowbrook Cinema was 1000 seats. The first “Little Cinema” was around 240 seats and replaced part of Lena’s restaurant in the mall. As manager I opened both of these theatres in 1969.The Anthony Wayne Drive-In Theatre (next door) was sold to Loews Theatres.

This opened on July 10th, 1970. Grand opening ad in the photo section.