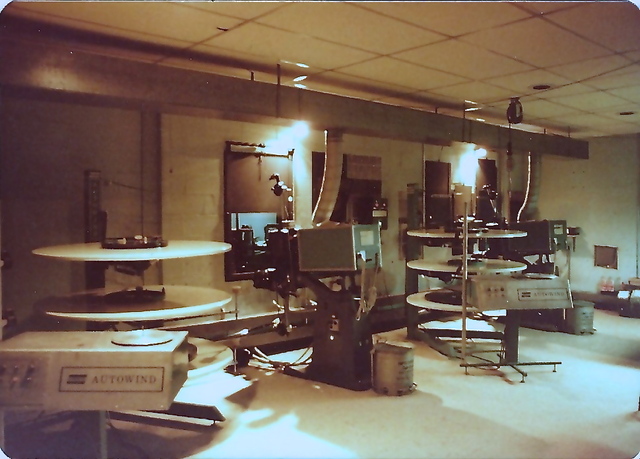 Did this theater have stereo sound?

The Loew’s theatre indeed boasted of its 10-channel stereo sound system with “The Ugly Dachshund” as its opening 70mm film on their 60' screen on April 8, 1966.

Dallas: I have a question regarding your comment of 6/17/19. I am no researcher so I am not claiming to know, but I find it hard to believe that there was ever a 70MM print of The Ugly Dachshund. Even if there was, Loews was a Union operation and I can not imagine them paying the bill for two projectionists which would have been required for any 70MM run. Could it be that the promotional material for this location promoted its 70MM projection without actually saying that the movie itself was presented in 70MM? I have seen ads for 35MM presentations stating something like….“See It On Our Giant 70MM Screen.” Maybe it was something like that.

The pictures of the booth after twinning appear to show Century 35MM projectors. From the distance and angle they could certainly be 35/70’s, but there are no 70MM mag sound heads on top. In Atlanta when they twinned the Tara which was a 70MM house, only one side retained 70MM capability but they left the sound heads on both projectors. I was also curious about that 10 Channel sound system. Maybe they promoted it as “4 and 6 channel stereo”? Or, maybe they meant 6 channel movie sound and 4 channel intermission music from their 8 track tape player? Just kidding of course.

Is the building in existence or has it been torn down for the bank or APPLEBEE’s?

Disney released a 35mm print of said movie. Wonder if future movies that played in 70mm here were mentioned.

StanMalone the projectors in the photo are Simplex XL projectors. You can tell by the black color and the light switch on the projector head door. Loews probably did the same thing here that they did in East Brunswick NJ after twinning. They removed the Century projectors which were 35/70 and replaced them with 35 year old Simplexes.

Opened with Walt Disney’s “The Ugly Dachshund” and “Winnie The Pooh And The Honey Tree”.

Both Loew’s Incorporated and Loews (the other Loews that was merged in 2008) operated this theater throughout its entire history until Loews closed its doors for the final time on October 31, 1989. The last attractions were “Black Rain” at Screen 1 and “Sea Of Love” at Screen 2. However, a message that reads “call your local theater for schedule” remains throughout November of that year.

The Lowes In Parsippany was a 35mm only house with NO magnetic heads/or digital equipment. I worked there part-time and it was a great booth to work in and I never heard about any problems with equipment (besides the bulb burning out). The projectionist kept the booth in great shape and was a professional.