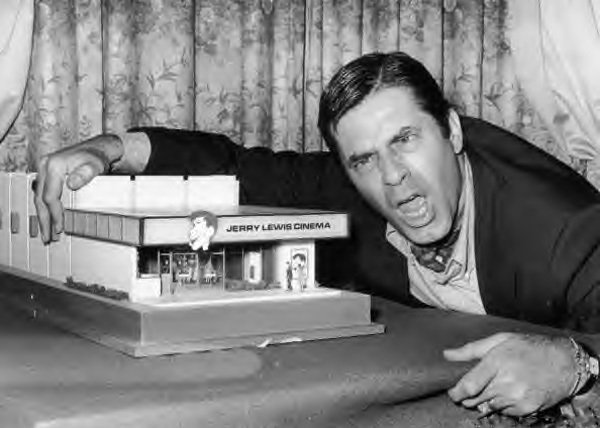 Yet another of New Jersey’s Jerry Lewis Cinemas, this one opened July 28, 1971 with Dustin Hoffman in “Little Big Man”. This one was listed as being in Belle Mead was actually in located in Hillsborough Township in the Hillsborough Club Plaza. On January 23, 1974 it was renamed Hillsboro Cinema. It was closed on October 17, 1991 with Hulk Hogan in “Suburban Commando”.

Did Jerry approve that UGLY caricature that was used for the marque and in ads ?

This theatre was supposedly the first Jerry Lewis built in New Jersey back in the early 70’s. It was located on Route 206 and Andrea Ave. It lasted until the mid 90’s. The owner of this theatre now owns the Hillsborough 10-plex about a mile south on Rte. 206. They had a great concept, these Jerry Lewis Cinemas, I think they just expanded too fast, and also caught the downturn in the movie business at that time, the early 70’s. I know this is what happened to the Jerry Lewis Twin in Carteret N.J.

Address for this theatre is Rte. 206 and Andrea Ave. It seated 350. Its function today is a gym. It was a single screen its entire life.

Was this ever known as the Hillsboro theater? – see attached link
View link

One in the same.

AUGUSTA, GEORGIA WAS SET FOR A JERRY LEWIS TWIN THEATRE AND WHEN AN AD APPEARED LISTING THE NEW THEATRES, GEORGIA THEATRES QUICKLY BUILT THE SOUTHGATE CINEMA IN AUGUSTA. FOR YEARS I TOLD THEATRE GUYS I WORKED WITHAND THEY THOUGHT I WAS CRAZY…A JERRY LEWIS THEATRE. NO ONE WOULD BELIEVE ME.

The Hillsboro Cinema closed by Bob Piechota at the end of a 20-year leasing agreement with “Suburban Commando” on October 17, 1991.