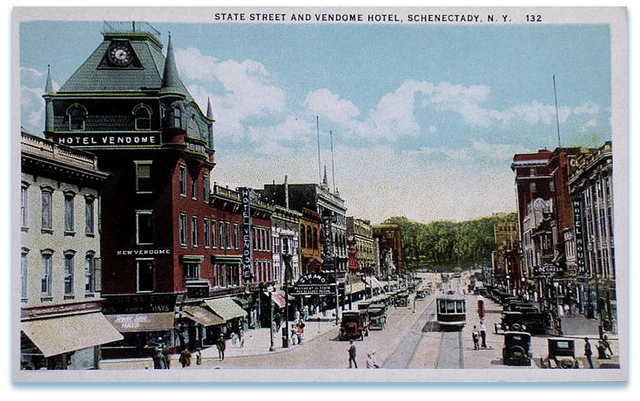 Located on State Street, originally opened as the Orpheum Theatre prior to 1908, and then renamed Palace Theatre in 1918. It was renamed Strand Theatre in 1923. It was notable for being the first Schenectady movie house to screen a “talking picture”, Al Jolson’s “The Jazz Singer” in December of 1927. The Strand Theatre is listed as open with seating for 1,300 in the 1929 Film Daily Yearbook. It seems to have closed in 1929 when the former 950-seat Barcli Theatre was renamed New Strand Theatre on August 31, 1929.

The Strand Theatre was demolished in 1929.

The Strand Theatre was originally called the Barcil, built in 1921, because it was located between Barrett and Clinton streets. It was extensively remodelled and reopend as the Strand on September 4, 1931.

When I was in high school in the 1950’s, the Strand was owned by a gentleman named Rapp, whose son Harvey went to school with me.

Sometime in the early 1950’s my parents drove us from Lowell,Mass. to Schenectady to visit with a couple they knew. To fill our evening ,so the adults could have grownup conversations ,they dropped us off at The Strand Th. It was a double bill and the picture we saw on entered was ,“It Came From Beneath The Sea”….I was 10 years old my kid brother was only 7. During the screening the projectionist must have forgotten to adjust the audio level on one projector, for as the screen creature emerged from San Fransisco Bay there was a tremendous ear splitting sound effect(much louder then the film was intended to produce). I screamed like a four old girl,it scared me so. Now ,(I was a boy )so I had two reactions, first embarrasment for being a wimp and secondly I feared if my brother told my parents the film scared me, they might never let us venture out to cinema again. We flash ahead to the present(55 years later), last week I took home from our Library a DVD of ,“It Came From Beneath The Sea”, a Ray Harryhousen epic and laughed myself silly. How in hell could I ever have been terrorised by this film????? Well the foolishness of youth, I guess. Sorry I didn’t really share my observations about your theater interior, but the film is mostly what I remember all these years later.

I worked with a gentleman named Lou Rapp at the Towne Theater in Latham NY. He had a lot of proud stories about the different theaters he managed in Schenectady. He even named his dogs Roxi. I believe Harvey was his brother

This was actually on State Street (Main is a very short street in a residential area). But all indications from google photos are that the Proctor’s is the only theater remaining on State St. Looks demolished.

The Barcli (not Barcil) and the Strand were not the same theater. Both the Barcli and the Strand are advertised in issues of the Schenectady Gazette between 1922 and 1929. A September 3, 1995, Daily Gazette column by Larry Hart says that the Strand Theatre opened as the Orpheum Theatre and was later renamed the Palace before becoming the Strand. Hart gives the address of the Strand as 409-411 State Street. I’ve found the Orpheum mentioned in The Billboard as early as 1908.

There are also photos of State Street showing a vertical Orpheum sign on the building that has the Strand marquee in the postcard currently displayed above.

The Strand Theatre’s building still exists, but it has been drastically altered and is now a trendy residential project called the Metropolitan Lofts, completed in 2012. Despite the changes, the auditorium roof can still be recognized in Google’s current satellite view.

I think the final, short paragraph of the current introduction must be in error. John A. Miller’s Historic Theaters of New York’s Capital District says that the original Strand was demolished at the time the New Strand opened.

Miller also notes that the Orpheum was renamed the Palace in 1918, and was renamed Strand in 1923.