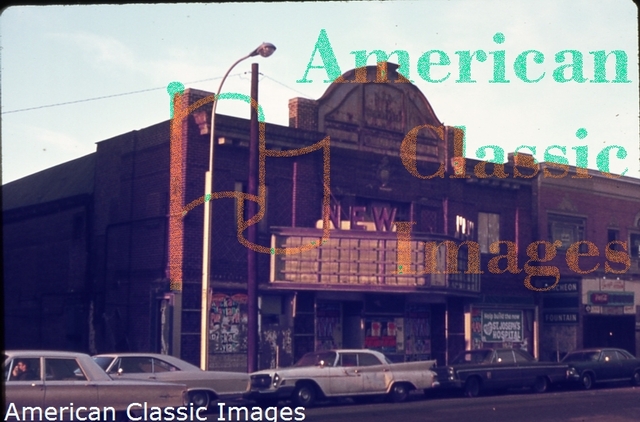 Another theatre that I found on the web is the New Theatre which opened in 1913. By 1938 it was operated by Kenroe Theaters Inc.

A description on the photograph located on the Related Websites link reads: “The ‘New Theatre’ on Rockaway Boulevard, looking southwest from Beach 80th Street, on the Rockaway peninsula in Queens, May 18, 1954. This is next to the site of the under-construction Hammel Houses, finished in 1955. The film playing is "Roman Holiday”, which, as advertised, had just won 3 Oscars, one for the ‘front’ writer for the blacklisted Dalton Trumbo".

The view from the side in the 1950s photo at the top matches the front view in this 1980 photo:
http://tinyurl.com/d9nv3a

There is no way the image posted 4/10/09 is the New Theatre when you compare is with the image posted 4/16/09. It has been suggested it is the Park but all the Park links are no longer working. Also it was never posted on the Park site for confirmation, but that wasn’t done. Could you please do so Ken.

I have confirmed that the 4/10/09 image is, in fact, the Park Theatre when it was the Belle Harbor.

The second photo link is indeed the New Theater before it was demolished. The Belle Harbor was the final name of the Park Theater which was located on Beach 116th Street. That building still stands.

In all the ads I’ve seen for the New they favored the spelling theatre.

Welcome back, Lost Memory! It’s been like five years. Glad to see you posting again.

As a child, I used to watch Saturday double features here in the late 50s/early 60s.

Greetings! I’d like to add a few corrections to the caption below the photograph. But first, my opinion is that this photo was Not from 1954 rather a little later. This photo depicts boarded up windows and posted advertisements. There is also No lettering for the movie that is presently being featured. I posted a photo of the New Theater with a lit up marquee and it’s from later 1954 or early 55. My photo shows area facing west and it does show a Hammel building under construction however, there are 5+ unviewable buildings behind the one being built. The New Theater (or Theatre) was located at 8008 Rockaway “Beach” Boulevard, Rockaway Beach, NY 11693 and was Not on “Rockaway Boulevard” (Rock Blvd begins in Nassau county, Long Island and continues through Jamaica, Queens and then on to Ozone park, Queens). Secondly, the photograph of the closed theater states the camera location as facing south when actually it stands from Beach 81 street facing North - East (toward B.80 street) My elementary school P.S. 183 is just up the block on B.80 street. Thirdly, yes the NYC Hammel Houses were built in 1954 however, families were already moved in by then. I lived there ½ block from the New Theater and I’ve been to this theater several times. Once to see Abbott & Costello. The luncheonette and candy store to the right of the theater was “Fanny’s” along with her husband George they were the proprietors. Doctor Blum was upstairs from the diner. “Lena’s” candy store was to the left (out of photo veiw) along with the NY Telephone company building (corner of B.81 street and still standing today!). As for the discussion on the “Park Theater”, “robboehm” is correct that the Park is a different theater altogether. It was located almost 2 miles away on B.116 street just feet from the boardwalk. I went there in 1966 to see “Hang Em High” Update! Sadly, The Park Theater has now been demolished (noted June 2021).