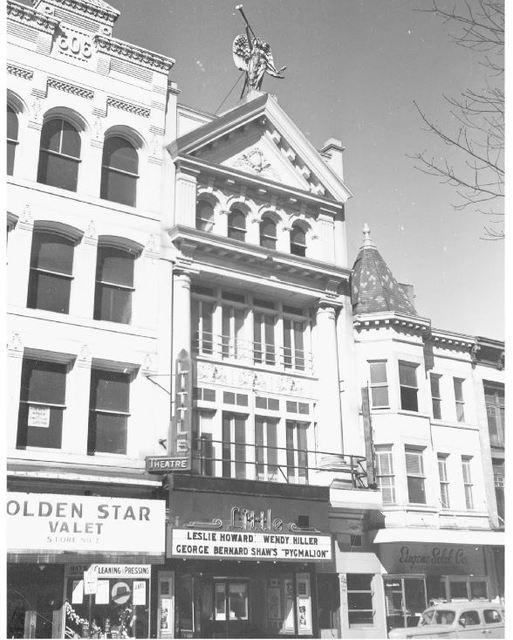 The Virginia Theatre was opened in 1909. In 1927 it was remodeled to the plans of architect Julius Wenig and reopened April 6, 1927 as the Little Theatre.

It must be! Many thanks. A while after it had opened in New York in August of 1947, Vittorio De Sica’s film Shoe Shine played at the Little and was in its sixth week at the time of publication of the 1948 Film Daily Yearbook where I saw a distributor ad (Lopert Films) which mentioned this theatre and others where that film had been booked. That shattering neo-realist movie was about the aftermath of World War II and a juvenile prison in Rome. I’m very much interested in the history of “early” exhibition of foreign-language films in the U.S. and older, often forgotten, art houses.

Opened as the Virginia Theatre in 1909. It was re-modelled by architect Julius Wenig in 1927, the seating capacity was given as 337. It re-opened on 6th April 1927 as the Little Theatre with the Russian classic “The Armoured Cruiser Prince Potemkin” aka “Battleship Potemkin”.

It was one of the first ‘art’ theatres in the city. In early 1929 the Little Theatre was taken over by Moviegraphs Inc of New York;Sydney Lust was on the board of directors. It closed suddenly on November 30th 1929.

Later operated by Mrs Louise Noonan Miller, daughter of the theatre’s builder Col. John J. Noonan of Cincinnati and associated with the Lopert organisation. It closed as an art theatre in May 1951, but continued to show movies for a few more years. In 1956 it was operated by the Trans-Lux organisation.

Just returned from DC and walked up and down this block trying to locate the theater. I had a close call with a restaurant but upon further examination it was once a masonic hall. Other than this restaurant, everything else on this block is newer construction. Theater should be updated to DEMOLISHED.

As a lifeling Washington area resident, I can shed a little light on the former LITTLE THEATER, even though I never saw a movie here.

First, there isn’t so much of a trace of DC’s 9th Street theaters (Little, Joy, Central, Leader, Shubert, Gayety). All gone. Most real estate replaced by new, modern buildings.

The LITTLE played many fine “art” films — under several owners. What I remember best was not a first run. After MGM’s “LILI” with Leslie Caron had its first run, as well as 2nd and 3rd runs in the neighborhoods, the LITTLE thought it still had value as an attraction and brought it back. It played over a year, as I recall. The admission price here was $1.00. It doesn’t seem like much, but this compares to 74 cents at the plush and beautiful Loew’s and Warner theaters that lined F Street.

I’ve just read this theatre played the Cabinet of Dr. Caligari in January, 1928.

I have an ad from the WASHINGTON TIMES of September 25, 1915, saying that the Virginia Theater (at 608 9th Street) was running a Charlie Chaplin film every day.

My older brother worked there as an usher in the early ‘50’s. I got to go with him a couple of times and sit in the projection booth. The only screen memory is of “Gerald McBoingboing” cartoons.