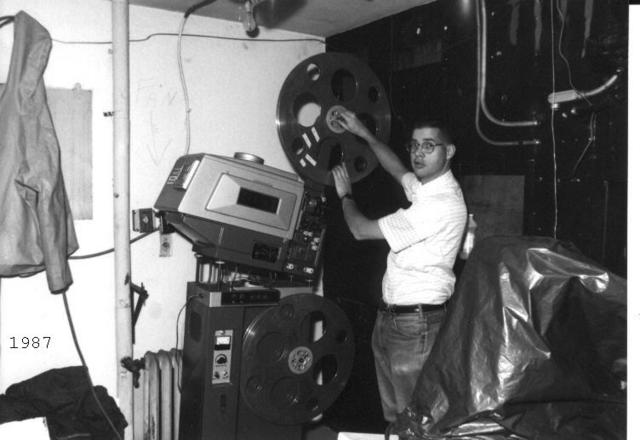 The Capitol Theater was opened on October 7, 1924. it was remodeled in March 1937, but was damaged by a fire on April 24, 1937.Repairs were made and it reopened on August 25, 1937. It received another remodel in 1948, reopening on May 7, 1948. It screens art, foreign, and classic films Sunday thru Thursday. Rock bands play onstage on Fridays and Saturdays.

The theater suffered major plaster damage to the ceiling during a February 28th, 2001 earthquake, but has since been repaired and re-opened.

Hi, I’m very pleased to have found this thread. I’m really enthused about the theatre. I’ve been an OFS volunteer for about 4 years, and a projectionist at the Capital Theatre for about the last two years. I have a picture of myself and some friends here in front of the new marquee at its unveiling at opening night of the recent 25th annual Olympia Film Festival. Lets see if this works..

Nice shot of the new vertical,looks very much like the old one in the shots.

The Capitol Theater has been sold to the Olympia Film Society.

Major fire damages theater. Balcony, mezzanine, and projection booth destroyed. Roof and ceiling damaged. Fire alarm turned in at 9:28 A.M. of Saturday April 24, 1937. Cause of fire determined to be spontaneous combustion of a single reel of nitrate 35mm film that had just been delivered the night before and was temporarily in the janitor’s closet in the mezzanine awaiting to be taken to the projection booth. Theater will be closed for several months to repair the damage.

The theater got remodeled again in 1948. Theater reopened on Friday May 7, 1948. Installed were Gulistan carpets and draperies along with Heywood-Wakefield seats.

Boxoffice magazine did a story about the April 24, 1937 fire. It is on this page:

A new canopy is being built over the sidewalk in front of the theater. A new framework and drainage is being erected right now. This new canopy will match as closely as possible, the original 1924 canopy.

1982 Theater leased to Gary Fine for one year.