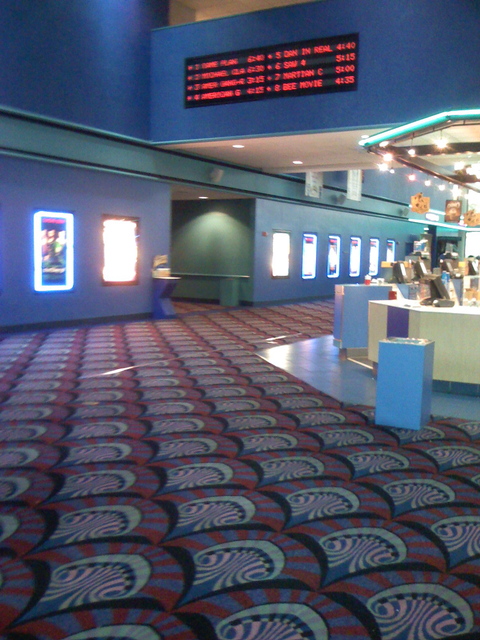 Edgewater Multiplex Cinemas opened on December 15, 2000. This 16 screen National Amusements cinema on the Hudson River contains all stadium seating, digital sound, and the “Movie Walk Cafe” which offers pizza, hot dogs, hand-cut fries, fried dough and ice cream. It’s recently been expanded on with a Nathans and a Sbarro Pizzeria.

Opening night features were “What Women Want”, “Emperor’s New Groove”, “Vertical Limit”, “Proof of Life”, “Dungeons and Dragons”, “102 Dalmations”, “The Grinch”, “Best in Show”, “Meet The Parents”, “Bounce”, and “Remember the Titans”. The opening of this cinema forced the Loews Showboat down the street to consider changing its booking format to show art films, however Loews closed the site before the end of the first quarter, 2001. The Edgewater Multiplex Cinemas closed on November 13, 2018 and was demolished in August 2019.

With the closing of this theatre, are there any National Amusements/Showcase cinemas left in New jersey?

Yes. The Hazlet cinemas is the only one i can think of that became a rave cinema and now a Cinemark with recliners. The Amboy cinemas still remains but it’s barren, and the All Jersey cinemas is gone in Newark.

moviebuff82, I was more asking if there are any still operating as NA/showcase cinemas. 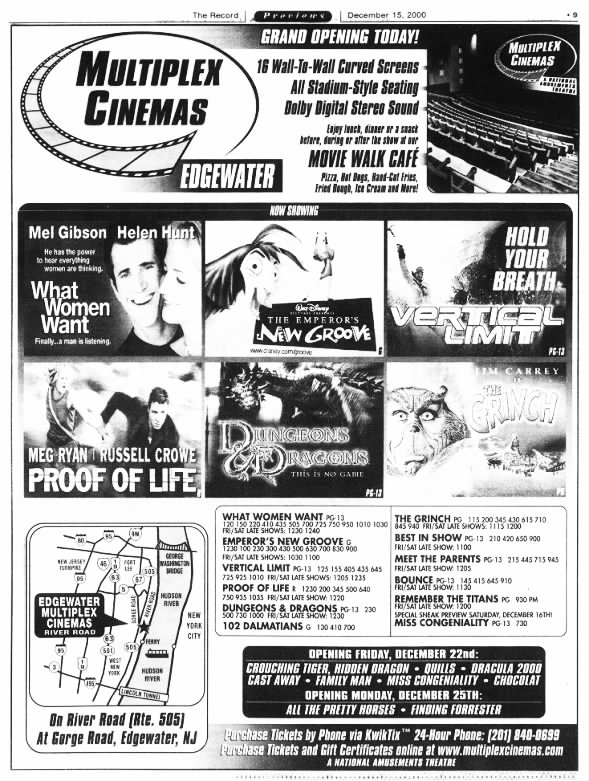 This was one of my family’s favorite venues. Attended many films here. And the true shame (and perhaps I’m being a bit naive, here) is that you have a beautiful building designed specifically for film that (if rumors are true)will probably be retooled for condos (just what we need more condos!!) It’s a wonder to me that the town of Edgewater could not (or would not), seemingly support this theater with their regular attendence. Perhaps another theater chain might look into this wonderful location!

Today is the day of the auction at this theatre. A buddy of mine just scored an entire JBL sound system and speakers. I heard the movie screens went for $200.00. Would be curious how much the digital projectors went for.

How about the 35mm projectors? I know that edgewater was one of the first if not the last to use digital projection during the late 90s and early 2000s. Ocean’s 11 was the first film to be shown digitally via technicolor for this theater and it proved to be a hit so they kept the projectors until it was closed. Wonder if someone bought the X Plus seats with atmos sound too…before the theater was demolished to make room for more houses…

What a truly sad state of affairs that the community of Edgewater (and its surroundings) could not (or would not) help sustain this beautiful 19 year-old (????) theater with its patronage! I’ve often read that it was some of the “highway” theaters (G S 16 etc.), which provide some additional “bells and whistles” with their feature presentations, that contributed to the downward spiral of this wonderful cinema venue. Please excuse my frustration but I’m the type of person who believes that we can never have enough movies theaters, especially of the “independent” type.

The theatre did a great business. It was not in any danger of closing. National Amusements was given an offer they couldn’t refuse. They took the money and ran.

It was one of its most popular theatres in the entire circuit. I wish they had sold it to Cinemark which took over the hazlet location or even Regal which is building a new movie theater where the amboy cinemas used to be. The owners of National Amusements will merge CBS with Viacom once again later this year in order to compete against the rise of streaming while box office slowly dies down.