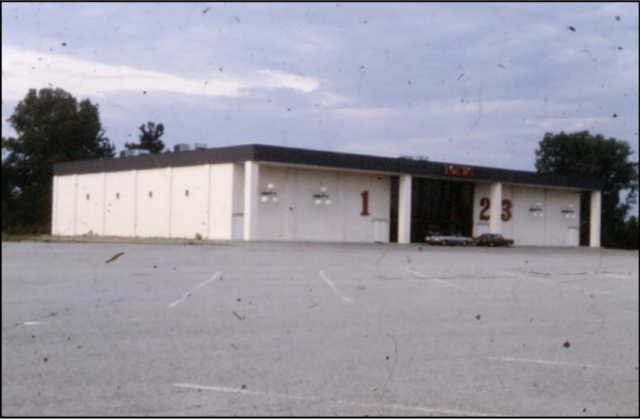 Another of my hometown theatres that has closed its doors. The Loews Twin Theatre was opened October 6, 1971. Both screens had 750 seats each. It was later converted into four screens. It was closed on November 20, 1998. The structure is now used as a comic and collectibles store.

I used to work there and I believe that at some point Loews remodeled and split the two massive auditoriums into four smaller ones.

The Norgate Plaza Shopping Center was announced in 1969 and Loews signed on to lease the $450,000 twin-screen 1,500-seat twin-screen project as it was closing its downtown theatre in 1970. The theatre launched on a 25-year lease with “The Skin Game” and “Johnny Got His Gun” on October 6, 1971. The mural work with legendary screen stars survived from opening to closing. A special “Skin Game” cake was at the launch as it was Warner Bros.‘ 1,500 film release.

About a year later, this venue changed names in November of 1994 to the Sony Norgate Plaza 4 when Loews and Sony were one and the company rebranded many venues under the Sony nameplate. Sony/Loews dropped the Norgate Plaza on October 31, 1996 at the end of a 25-year lease. Jeff Rawlins of Movie Craze Cinema Inc. or MCCI Theatres circuit took on the venue relaunching the next day, November 1, 1996 as Norgate Cinemas 4 - now a discount, sub-run venue. The final screenings were held November 20, 1998.

An independent operation was then formed to try and reopen the Norgate in 1999/2000 but the relaunch did not materialize. The Norgate comeback officially dissolved after a Chapter 7 bankruptcy filing in April of 2000 reflecting assets of $0 - which makes perfect sense if one thinks about it.