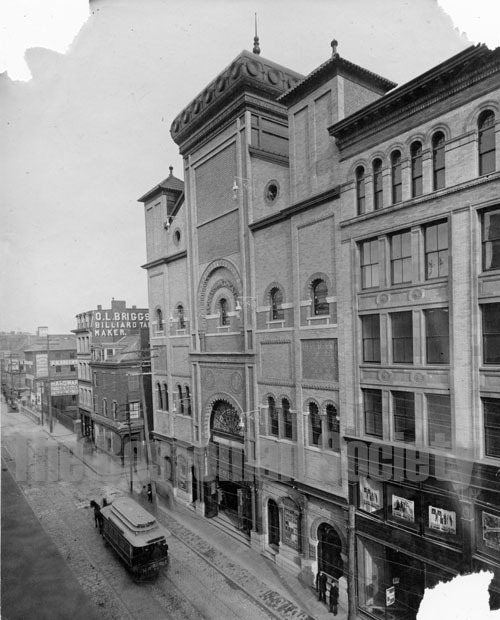 The Columbia Theatre opened on October 5, 1891, converted from what was originally a Congregational church built in 1828. The initial show was Belasco and DeMille’s play “Men and Women”, followed a month later by “Mr. Wilkinson’s Widows”, starring Georgianna Drew Barrymore.

Although intended as a first class theatre, there were soon problems in getting suburbanites into the neighborhood, which was rapidly deteriorating by the end of the 19th century. The theatre shifted from serious drama to Irish comedies and action filled thrillers designed to appeal to the local district.

1901 brought another problem to the Columbia: heavy elevated rail lines opened on two sides of the theatre, with trains roaring by day and night.

A fire destroyed much of the Columbia’s auditorium during the winter of 1916. Loew commissioned architect Thomas W. Lamb to create a new Adamesque style theatre out of the ruins. It reopened as Loew’s New Columbia Theatre on September 24, 1917. Its reopening featured the film “His Wedding Night”, starring comedian Fatty Arbuckle, who made a personal appearance on opening night, along with several acts of vaudeville.

[The information above comes primarily from an essay by Richard O. Card, founder of Boston’s South End Historical Society, and from a second essay by J. Paul Chavanne of the same organization. Also helpful was Donald C. King’s book, “The Theatres of Boston: A Stage and Screen History”.]

As “Loew’s New Columbia Theatre”, this house is listed in a 1918 Boston street directory at 978 Washington Street (east side), South End, at Motte Street and railroad right-of-way.

The 1906 edition of the Julius Cahn Official Theatrical Guide lists this theater as the “Columbia Music Hall” and says it was “Devoted to Burlesque” (as a schoolboy in the 1950s, I too was “devoted to burlesque”!) Tickets cost 10 cents to 75 cents. The proscenium opening was 38 feet wide X 39 feet high, and the stage was 43 feet deep. It says there were 1,923 seats, but the breakdown does not add up to that: Orchestra 491, 1st balcony 320, 2nd balcony 362, gallery 600; total: 1,773 plus box seats. I believe there were only 2 balconies, so “1st balcony” and “2nd balcony” were probably the same structure divided by a cross-aisle.

This theatre is mapped on the wrong Washington Street (Brookline, instead of Boston’s South End), miles from where it belongs.

An article from one of the Boston Globe about the 1917 fire from the Boston Fire Historical Society: http://www.bostonfirehistory.org/newspaperfire02211917.jpg

The Boston Globe report of the fire in 1917 states that it was believed that the walls would have to be demolished. But that did not happen. The facade was saved, and possibly parts of the side and rear walls. The auditorium that Thomas Lamb designed right after this fire did not look anything like the original auditorium. I wish I had known more about the history of this building back circa-1953 when it was still standing. I would have gone over there and looked all around the place.

I recently looked at a photo which was taken for the Boston Elevated Railway Co. showing construction of the connecting link from the existing el structure down into the new Washington Street tunnel (today’s Orange Line). The link and the tunnel opened in November 1908, so the photo dates from earlier in 1908 or in 1907. Clearly seen in the background is the Columbia Theatre. The odd thing is that the fire escape doors from the gallery on the upper portion of the north wall (left side of theater) have no fire escapes under them! It’s possible that the photo was taken just after the old fire escapes were removed and while awaiting the installation of new ones. Otherwise, it was a very unsafe situation.

In the book about vaudeville: “No applause, just throw money,” the Columbia is mentioned as a ‘tryout’ theatre for vaudeville. People trying to break in to the business would go there to break in their acts. Apparently, such theatres were very rough on performers – the audience was ready to boo them off the stage, and the managers would run them off before they finished their acts.

Yes, a hundred and more years ago, there was a lot less affluence and fewer entertainment choices. When audiences went to vaude shows they expected to get their money’s worth and if a performer didn’t deliver, he/she would receive a loud round of boos and hisses. Especially in the, shall we say, less-refined theaters. Some managers even reputedly employed a “hook”, which was a long pole with a big metal hook at the end. He would reach out from the wings and hook the errant no-talent around his waist and pull him off the stage. It’s likely that some movies got booed too, but maybe not until the end.