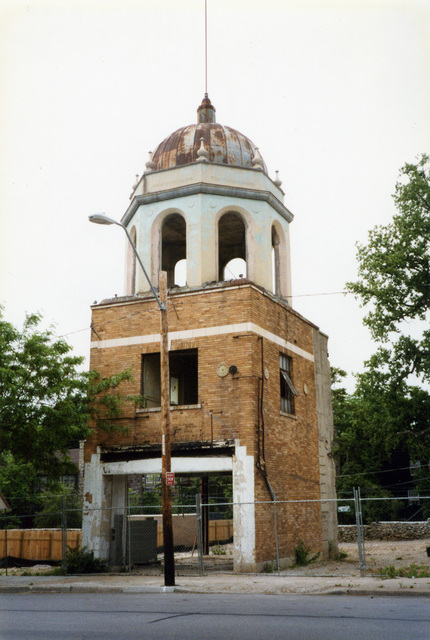 The Rockhill Theatre opened May 20, 1927 with Laura La Plante in “The Love Thrill” and a stage show. Organist Morrill Moore played the organ. It was located on Troost Avenue at Brush Creek Boulevard. It was closed in 1954 and reopened as the Rockhill Art Theatre ion September 6, 1956. It has since been demolished. The only remnants of the once beautiful theatre is part of the front entrance with the dome above the building.

I was the last Mgr. of the Rockhill Theatre. I worked for a small chain of Art Theatres from 1963-1972. The company was Art Theatre Guild, Inc. Founded by Louis K.Sher in Bexley, Ohio in 1955. The company moved its HQ to Scottsdale, Arizona in 1963. I was promoted to manager in 1964 and sent to Tucson to operate the Loft Theatre, which I also lived in. I also managed the Fine Art in Fresno, The Rockhill in KC, the Cinema in Hollywood, the Art Theatre in Dayton along with the Little Art in Yellow Springs, Ohio and The Bexley (then first twin theatre in America) in Bexley, Ohio along with the World Theatre in Columbus and the Opera House in Granville, Ohio.
I moved to KC in January of 1967 to replace the Rockhill’s current manager. Shortly after Russell Patterson and the Kansas City Lyric Opera completed their ‘67 season, the manager I replaced went into Bill’s Bar (part of the Rockhill Theatre Building) made his way to the men’s room where he forced open a small door and made entry to the back stage area of the theatre. He set the curtains on fire and the Kansas City Fire Dept. spent 12 hours fighting the blaze. The ex-manager, after being fired from the Rockhill, went to Kansas City, KS, worked for another chain and eventually set fire to that theatre. He was convicted of arson and served time in Kansas. I do not know if he was ever prosecuted for the Rockhill fire. My wife and I spent last weekend (4/21-24/2006 in KC and I was saddened to see how run down that area of Troost between 46 and 47th has become. Feel free to contact me if you nhave any questions. I suggest you look up the Bexley Theatre in Ohio for some interesting reading and photo.
email –

Troost is beginning to make a comeback. Some of the retail strip along Troost north of Linwood has slowly been cleaned up. There was a volunteer effort to plant tulips along Troost this past autumn to bring some landscaping and beauty back to the street. There appears to be an effort to build community support for restoring the Apollo Theater on Troost just south of Linwood as well.

The voters in Kansas City recently passed a light rail project as well, and it will run along some parts of Troost. Hopefully, this will help spur some development along parts of it.

Listed in the 1943 edition of Film Daily Yearbook with a seating capacity of 1,466, the Rockhill Theatre was then operated by Fox Midwest Amusement Corp.

Fox Midwest’s Rockhill Theatre had been closed for over a year when, in 1956, it was purchased and reopened as an art house by Louis Sher and Edward Shulman. A $75,000 renovation and redecoration was carried out by the Teichert Studios of Chicago. The seating capacity was reduced by nearly half, to 720, with new 21-inch seats in 44-inch rows. Decoration throughout the house was simplified, and a coffee bar was installed in place of the lobby concession stand. The new screen had a 3 degree curve and flexible masking to accommodate a variety of aspect ratios.

Boxoffice Magazine of September 1, 1956, announced that the renovation project had been completed ahead of schedule and that, after a benefit premier on September 5, the Rockhill would have its public opening the following day with “The Proud and the Beautiful.” On the 19th, the house would participate in the world premier of “Lust For Life,” the Vincent Van Gogh biopic which featured paintings loaned from the collection of the nearby William Rockhill Nelson Art Gallery.

L.L. Thatcher penned a three-page article about the Rockhill’s renovation for Boxoffice of October 20, 1956. There are several photographs illustrating the article.

ATG what a story,guy never should have been a manager,Thankgoodness no one was killed.

Linkrot repair: The October 20, 1956, Boxoffice article about the remodeling of the Rockhill Theatre now begins at this link.

I loved the Rockhill Theater and as a teen had some enjoyable dates seeing some of the famous art films of the era. I had a girlfriend that also loved those movies and always dress up in the prettiest dresses. I can still recall sitting there watching the movie – David and Lisa. I think it was there for nearly a half a year. Nearly all of Sweden’s award winning films were shown at The Rockhill – It was so sad that it was lost due to arsen. I never liked the new moderan marquee – the original was so beautiful at night and the domed area all lit up. I also saw 3 James Bond movies there for a 007 Festival. I think that was pretty close to the end. It was a very nice theater. Had it survived, it would have probably become a Fine Art’s Theater and maybe still in operation.